The history of Navy VX development/evaluation squadrons is complicated and inadequately documented but I've attempted to summarize it. An example of complication is VX-3. In its first (and brief) incarnation, it existed to evaluate helicopters and develop operational procedures for them. 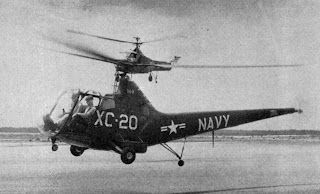 The aircraft evaluated by the second VX-3 couldn't have been more different, although it even used the same tail code initially. 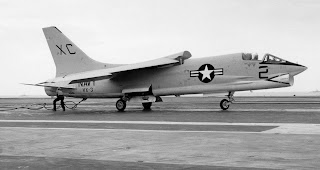 VX-3 was one of four new air development squadrons (VX) that the Navy formed in 1946 to develop and evaluate aircraft tactics and techniques as directed by a command that was a consolidation of fleet units doing development work. (In December 1947 this command was designated the Operational Development Force.) Other squadrons were subsequently added. In 1969, the surviving Air Development Squadrons became Air Test and Evaluation Squadrons.

VX-1 (XA/JA) Anti-Submarine Warfare: VX-1 was originally an Aircraft Experimental and Development Squadron established at NAS Anacostia in Washington D.C. on 13 August 1942 (in 1945, according to Johnathan Clayborn’s comment below, it was an Air Test and Development Squadron). A detachment for aircraft antisubmarine warfare development was established at NAS Quonset Point, Rhode Island on 1 April 1943. This detachment was the basis for the next VX-1, which was commissioned on 15 March 1946 and moved to Boca Chica Field, NAS Key West, Florida. VX-1 relocated to NAS Patuxent River in September 1973 and is the only one of the original four VX squadrons still in existence.

VX-2 (XB/JB) Drone Controller/Guided Missile Development: VX-2 was formed on 15 March 1946 from VJ-20, which existed for only a week having previously been XVJ-25, which was established on 16 June 1945 at NAS Brunswick, Maine to support XVF-200, an Experimental Development Squadron formed at the same time to evaluate and test Kamikaze defenses. In 1956, according to Johnathan Clayborn’s comment below, it was know as an Operational Development Squadron. VX-2 was based at NAS Chincoteague, Virginia until it was disestablished circa 1958.

VX-3 (XC) Helicopter Development: Established at NAS New York on 1 July 1946 and moved to NAS Lakehurst. It apparently didn't take long to sort things out because the first VX-3 was disestablished on 1 April 1948. Its personnel and aircraft were assigned to one of two utility helicopter squadrons HU-1 (UP) and HU-2 (UR) located on the west coast and east coast respectively.

VX-3 (XC/JC) was reincarnated in November 1948 at NAS Atlantic City to accomplish development and evaluation of jet fighter tactics and procedures. It was formed by merging VF-1L and VA-1L of Light Carrier Air Group 1L. VX-3 was relocated to NAS Oceana, Virginia before NAS Atlantic City was decommissioned in July 1958. It was disestablished on 1 March 1960.

VX-4 (XD) Airborne Early Warning Development was established with the personnel and aircraft of VPB-101 on 15 May 1946 at Floyd Bennett Field, New York, flying PB-1Ws (B-17Gs with APS-20 air search radar installed in place of the bomb bay). The squadron made the first hurricane surveillance flight using radar in September 1946. It relocated to NAS Quonset Point, Rhode Island, in September 1946. It subsequently moved to NAS Patuxent River in July 1948 and was reportedly redesignated as Airborne Early Warning Squadron 2 (VW-2) in June 1952.

VX-4 (XF) Air-Launched Guided-Missile Development: Established 15 September 1952 at Point Mugu, California. It was disestablished on 30 September 1994 as part of the consolidation with VX-5 to form VX-9.

VX-5 (XE) was commissioned on 18 June 1951 at NAS Moffett Field, California. The squadron was initially assigned the development and evaluation of aircraft tactics and techniques for delivery of special weapons (nukes) from AD Skyraiders in all-weather conditions. In July 1956 VX-5 moved to the Naval Air Facility, China Lake, CA, since much of their test effort had involved use of the ranges and instrumentation facilities there. Semi-permanent detachments were located at several other bases Over the years, VX-5 maintained detachments at other Navy bases, e.g. at NAS Whidbey Island, WA to monitor EA-6B developments. VX-5 was formally disestablished on 29 April 1994 as part of the consolidation with VX-4 to form VX-9.

VX-6 (XD/JD) Antarctic Program Support: Established at NAS Patuxent River, Maryland on 17 January 1955 and subsequently relocated to NAS Quonset Point from which it deployed to the Antarctic from October to February each year. It was redesignated as VXE-6 in January 1969. Before Quonset Point was closed in 1974, the squadron was relocated to Naval Air Weapons Stations Point Mugu, California, where it was disestablished on 27 March 1999. (At some point, possibly associated with the move to the west coast, the tail code became XD again.)

VX-7 I haven't found anything on a squadron operating as VX-7.

VX-9 (XE) was formed at China Lake from the consolidation of VX-4 and VX-5 directed by the CNO in June 1993 as a cost reduction measure. It was established on 30 September 1994. It evaluates strike warfare airplanes, weapons, and tactics, to include electronic countermeasures, from an operational standpoint.

HMX-1 was established in on 1 December 1947 at MCAS Quantico, Virginia for the development of amphibious assault via vertical envelopment. In September 1957, it acquired the additional role of presidential transportation via helicopter.

The aircraft test and evaluation squadrons at Patuxent River were redesignated as VX squadrons;

HX-21 Naval Rotary Wing Aircraft Test Squadron (for some reason, this squadron does not mark their aircraft with a tail code)

I was with VX-3 in Oceana Va... We were one of the first to use the Martin Baker High Altitude/low altitude ejection seats. I was on that team.
Burt Weinerman

The Massey Air Museum (MD1) is honoring Alberto H. Santa Maria (deceased) by painting our life-size replica F4U as Corsair 53 of VX-3 to match a photo of #53 on it’s nose (piloted by Mr. Santa Maria) after a deck strike while landing on USS Palau (CVE-122) in 1949. Mr. Santa Maria was a member of our museum. Mr. Santa Maria also flew the Piasecki HRP. We are researching any pertinent history on Mr. Santa Maria, Navy Exper. & Devel. Sqn. VX-3 & F4U 53, BuNo. 122005? Please contact Bill Dougherty at email@masseyaero.org. if you have any information.

I served in VX2 at Chincoteague , Virginia NAAS air station -- From March 1951 until November 1954 when I was discharged early because the Korean war was over . I was one of the unusual because I joined the Navy as a HSAR , High School Airman Recruit , and got a head start up the ladder. I went from civilian to 1st class petty officer in less than 4 years. after airman school I report to mechanics school (I choose AD ) I then choose VX2 squadron to serve. I had a very interesting service . I was plane captain of many types of aircraft and served as our only JD1 plane captain with enough air time to get Hazardous duty extra pay . I was chosen to be on the only 4 engine bomber to fly as a Drone ( what was some hairy flights that was , developing how to control it !! It was shot down on it's maiden drone flight by a surface to air missile launched off the deck of a aircraft carrier sailing on the atlantic ocean waters. I was chosen to go to Pensacola flight school but fate intervened .

My Father was AMM2-c Glenn P. Buter. He was a member of VX-3 stationed at Lakehurst, NJ. In Oct 1947 he deployed aboard the USS Midway as part of Helicopter Tactical Squadron VX-3 attached to Bomber Squadron One-B. On Dec 29, 1947 he and Pilot Lt. William Lamm and Co-pilot LT (jg) Jack Jeter were killed in a helicopter crash in Naples, Italy.
I am looking for any and all information regarding this time from Oct-Dec 1947. What type of helicopter they were flying, any ship logs, deck logs, flight logs, accident/incident reports. There are differing accounts of the crash that I have found. Newspaper articles say the rotor left the aircraft and crashed killing all aboard. I talked to an eye witness, unbelievable that after all these years that an eye witness was available, who told me that he saw the engine start to smoke, then explode, then the rotor left the aircraft which then crashed on the beach where all aboard were killed. He also told me that he and other witnesses were called to the quarter deck and gave accounts of what they saw. So there is a written account of that day somewhere, but so far I am unable to locate it.
If anyone has information regarding my Father or this incident, I would sincerely appreciate any and all assistance.
Thanks, Dennis J Bublitz (born Dennis J Buter)

I served with VX3 at NAS Atlantic City, NJ and NAS Oceana, VA, from 1957 to 1959. It was a great squadron and as a “AT” I got to work with the factory rep’s on all the latest fire control radar systems.

I served with VX 3 at NAS Oceana from July 1958 till it was decommissioned. I was transferred
to VF 74 (across the street) and made a Med cruise on the Intrepid, CVA 11 from August 1960 to
February 1961. Got a early (90) day release, and discharged on March 10th. Some of the most
memorable time in my life. NavAv was the best. Don Ward AQF2

Hello -
Always looking to connect with anyone who may have known my grandfather CDR Ray Boyd.
He was a VX-3 Pilot. He died in '57 -his F-8 lost power after the cat on the FDR.
He did not eject and drowned - I have often wondered if the seat failed.

I was assigned to VX3 based at NAS Atlantic City mid year of 1958 After Graduating from Jet Engine School in Memphis. VX3 was a great squadron. VX 3 made the move to NAS Oceana I believe in the fall of 1958. We made Car-Quals on the Independence CVA62 and TAD to NAS GETMO CUBA for a month late in 1958. We were restricted to base for the entire month because of Castro and Batista fighting it out. We were told it was for Gunnery Practice with our F8U’s and F4D’s. There was a Marine Squadron of F8U’s across the flight line from ours. I was ADJ3 Plane Captain. It was a great experience and duty with VX3. Met a lot of good guys. AQF2 Don Ward is still one my best friends.
Art Neville from the Neville Brothers , was also in VX3 in Oceana. Spent some time at the “Seahorse Club” listening to Art . Definitely some of the best times I had in the Navy. Got transferred to VA94 out of NAS Alameda working on A4D’s. Did a West PAC cruise with CAG 9 on the USS RANGER CVA 61. Wouldn’t trade the 4 year experience

In 1956 VX-2 is the "Operational Development Squadron", according to the Allowances and Locations of Navy Aircraft report.