The basic concept of the aircraft carrier catapult hasn't changed much over the years. The airplane is fitted with something to hook it to the catapult and something to hold it back under full throttle until the catapult is activated. The hold back is designed to break (or nowadays release) when the airplane is being pulled forward at a force somewhat greater than that provided by full power and the catapult shuttle being pulled forward to tighten the hookup. However, the details have changed significantly.

Before World War II, although carriers were fitted with catapults, takeoffs were usually accomplished by a deck run rather a catapult launch. It was quicker and to a small extent safer since catapult failures were not unknown. However, as airplanes got heavier, requiring more distance to take off, and more of them were crowded on deck, resulting in less distance for a takeoff run, the catapult launch became more the rule than the exception. 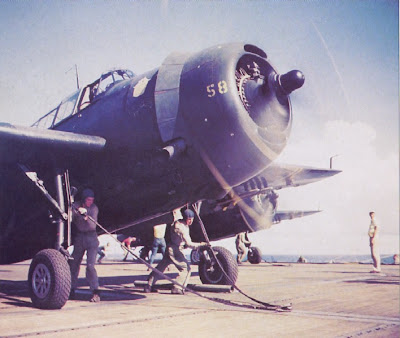 The catapult bridle (two attach points on the aircraft) or pendant (one attach point) was considered disposable. It simply dropped from the aircraft and fell into the sea off the bow after the launch. It's not clear whether there was an alternative hookup during the war which retained the bridle/pendant on deck. 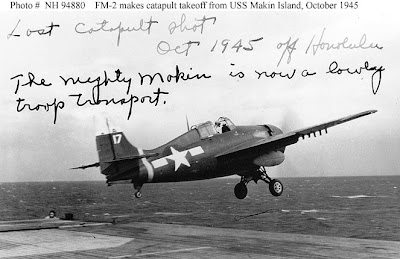 However, at some point the bridle/pendant was retained on deck by means of a heavy elastic strap that was attached to both the bridle/pendant and the catapult shuttle. After a certain number of launches or visible damage, the bridle/pendants were disposed of, either by a launch without a retainer when it was one launch short of the limit or being dropped over the side if damaged. This is an S2F which used a pendant. 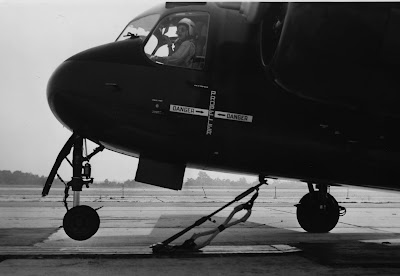 It appears that there was little commonality among aircraft with respect to launch gear, including hold backs, particularly the strength of the "weak links" that broke when the catapult fired. 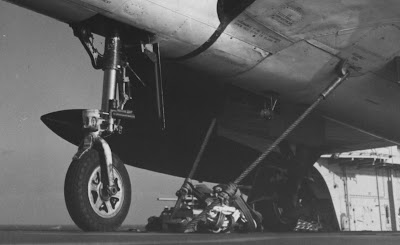 My guess is that pendants were more desirable than bridles from the deck crew's standpoint because they were lighter but bridles may have been necessary on some airplanes to accommodate a slightly off-center lineup.

Still later, somewhat after the introduction of the angled deck and the steam catapult, "bridle catchers" were added ahead of the catapult on some carriers. It appears that on those carriers without bridle catchers, the previous practice of using elastic straps to retain the bridle/pendant on deck was no longer used and it was disposed of with each launch.

The bridle arrester lanyards were attached to the bridle and a track on the deck parallel to the catapult track.

The bridle rig wound up on the bridle catcher following launch and were retrieved with the shuttle.

The bridle/pendant hookup process was somewhat labor-intensive, time-consuming, and dangerous. It also relied on the skill of the catapult crew for a proper hookup. In this case, the sailors who are going to hook up the hold back are lying on the deck. The bridle is lying on the deck already looped around the shuttle. 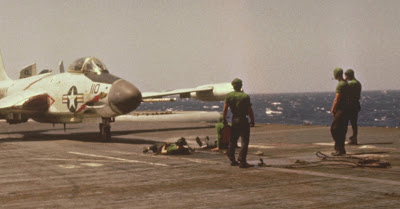 The solution was the integration of the launch and hold back hardware on the nose landing gear. Beginning with the Grumman E-2 Hawkeye, all new carrier-based airplanes were to be designed with this capability. The first at-sea E-2 launch was accomplished on 19 December 1962 from Enterprise, the first carrier equipped with the nose tow capability. (An adapter allowed the catapult to be used to launch airplanes that still required the bridle/pendant.)

The holdback is now reusable, although a specific one is required for each aircraft and are color coded accordingly. 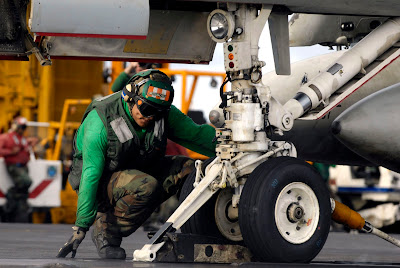 Note that only one sailer is required in close proximity to the aircraft using the nose tow concept.
Posted by Tailspin at 3:41 PM

During the early part of the USS John F. Kennedy’s first cruise in 1969 we had some interesting and exciting incidents related to the catapult shuttles and bridles. The catapults on the JFK had a new feature that was intended to provide a less violent acceleration at the beginning of the cat shot. This was a diaphragm type valve, somewhat like a camera shutter I think, that let the steam into the catapult cylinder more slowly than the traditional valve. This turned out to have near tragic results because the lighter aircraft were able to outrun the shuttle for the first few feet of the cat stroke. I was flying A-4Cs at the time and we were noticing a slight jolt as the shuttle caught up with the bridle, but we didn’t know what was causing it. The implication for the prop planes, E-1Bs and EA-1Fs, was much more significant. Because of their power to weight ratio they had a faster acceleration after the hold back broke and were able to outrun the shuttle by a greater distance. In two instances the bridle lifted during this initial acceleration, allowing the shuttle to pass beneath it as it went by. This left the aircraft a full throttle and heading for the end of the deck. Both times the pilot was able to get the aircraft stopped but it was a near thing. After the second incident the props did deck run takeoffs while technicians came out and set up high speed cameras to capture what was going on. They eventually made some adjustments in the way the steam diaphragm worked and we all went back to normal operations for the rest of the cruise. I’ll bet it was awhile before those prop guys felt comfortable with the new cats.

Looking for any info on the 5-in-51Cal-MK-3 Catapult shell that I have, it was my dads, is all brass and also says on the bottom N.S.-11-1942-JRD US (with an anchor between the letters)-LOT-209 an info would be helpful, email here is wabbels1959@yahoo.com thanks

Thank You. I served aboard the USS Intrepid in 1st Division. I told people that our berths above the Fo'c'sle (02 Level) would vibrate and sound like a 5"-38 going off. When hitting the Bridle arrestors, the bridles would act as a clapper on a bell and would transmit the noise through the hull and the decks.
Now, I have hearing loss, tinnitus and so forth and can give a direct link to the hearing loss and my Navy time.

I spent 64-65 on fly one catapults
we slept under the catapults, but got used to the banging
I was a yellow shirt E-4 and made E-5 and some jerk E-5 gave me
A Bad recommendation. He kept me aboard doing duty in ports so he
could go over and get drunk and sleep with the ladies in islands in
the caribbean. I should have stayed in. but got out in April 66
my hearing is shot, less then 50 percent on some noises. Sometimes I answer
the phone, but it my ears. I have fought the VA over it. Still at it.
Some kid sued them over hearing loss and got a big chunk of money. long
after us. There is a court case on it.

Remember they used to shoot the 6 inch guns off at tows, and we had no muffs
that went on a lot.

The Catapult Bridle failed and Lieutenant Allen's F3D crashed into the sea only to be cut in half by the Roosevelt's bow.

Bobbie Allen survived the crash and went on to a distinguished aviation safety career with the Civil Aeronautics Board and the National Transportation Board.