I recently had the incentive to revisit this diatribe in the process of responding to a request from another author about the F-111B program. As before, this assessment was made using the respective Standard Aircraft Characteristics charts, the F-111B’s dated 1 July 1967 and the F-14A’s, dated April 1977. While the argument can be made that the F-111B SAC did not reflect its final weight, I believe that the same argument can be made concerning the one used for the F-14A, so it’s at least a pretty close apples-to-apples comparison. Note: In the following discussion, the F-14A is penalized with the weight of an internal gun and ammunition whereas the F-111B is penalized with the weight of the original Airborne Missile Control System (AMCS) design, roughly the same.

Much has been made of how terribly overweight the F-111B turned out. And it was, compared to a totally unrealistic specification. Many think that the F-14A was far lighter than the F-111B, primarily because most comparisons neglect to do so using the F-111B’s design mission for both aircraft. The F-14A is still lighter, of course, because the Navy changed its requirements so that it would be. Deleted were the escape capsule, bomb bay, and swiveling wing pylon stations among other things. The Hughes Airborne Missile Control System, given a few more years of development, was lighter. The structure was designed for 6.5 gs at 49,548 lbs, about 10,000 pounds less than the F-111B’s design gross weight at that g level. In other words, the six Phoenixes and 3,800 lbs of fuel were treated as an overload for the design of the F-14A structure. At combat weight (13,800 lbs fuel and six Phoenix missiles) the F-111B therefore had a load limit of 5.8 g and the F-14A (12,000 lbs of fuel and six Phoenix missiles), a lower (but not particularly constraining) 5.2 g. The result, however, is a somewhat lower structural weight for the F-14A.

According to the F-111B SAC, when it was loaded with full internal fuel and six Phoenixes, it weighed 77,566 lbs and required 11 knots wind-over-deck on a tropical day for launch; the F-14A, not surprisingly, weighed almost 7,000 lbs less but, surprisingly, required 16 knots wind-over-deck, five knots more than the F-111B. Moreover, at its takeoff gross weight the F-111B was carrying 3,000 lbs more fuel than the F-14, making the difference in takeoff gross weight for the same amount of fuel and weapons carried only 3,866 lbs, or 5%, not exactly the amount or percentage difference that most would have guessed given all the negative publicity garnered by the “Sea Pig.” With that additional fuel, the F-111B could loiter on station for 1.5 hours with the combat fuel allowance assuming an acceleration to 1.5 Mach; the F-14A with the two external tanks of overload fuel, and with the same combat Mach number (one has to read the SACs very closely), could only loiter for 1.1 hours.

As for landing, they were both heavy. In fact, the maximum arrested-landing weight limit of the F-14A precluded it from landing back aboard with all six Phoenixes, whereas the F-111B had a 5,000 lb margin, all fuel, between its maximum landing weight and the landing weight with the standard landing fuel load of 2,417 lbs of fuel and six Phoenix (56,980 lbs). One does not need to be a Naval Aviator to appreciate being able to land with three times the required fuel. On a tropical day at the standard weight, the F-111B needed 15 knots wind-over-deck for landing; the F-14AA could only land with five Phoenix, and even then needed 17 knots wind-over-deck at its maximum landing weight of 51,830 lbs. The F-111B was also less of an handful following an engine failure since its engines were not as widely separated as the F-14A’s.

The F-14 was not notably smaller than the F-111B either. An airplane that has to takeoff with six big missiles (it was nicknamed Buffalo), a very capable missile control system, two guys, and enough fuel for an hour or so on station is not going to be the size of an F-4, even though that's what the Navy insisted on when the TFX program began. 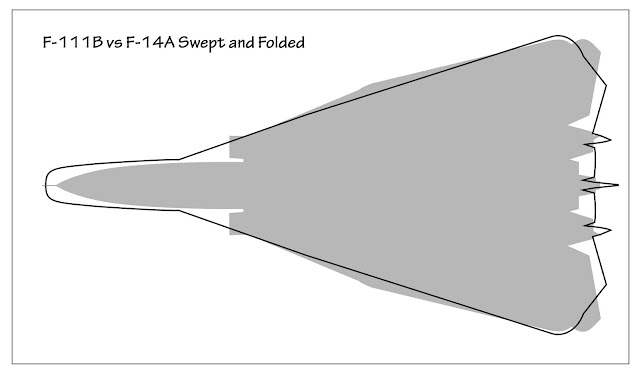 (Full disclosure: the F-111B's nose is folded upward as it was designed to be for parking on a carrier deck.)

For a little more on the F-111B at-sea trials often used to condemn the F-111B's carrier compatibility, see http://thanlont.blogspot.com/2009/03/f-111b-carrier-trials.html

This is not to say that the Navy didn’t do the right thing in getting the F-111B program cancelled and replacing it with the more versatile F-14, particularly since the Hughes AMCS wasn’t ready for prime time (the Navy's Phoenix program was about two years behind schedule and production F-111Bs were about to be delivered). However, with respect to its Fleet Air Defense design mission, it got an airplane that could not loiter as long or land with its full complement of missiles, had a higher stall speed, required more wind-over-deck for takeoffs and landings, and was more difficult to bring aboard with two engines running, not to mention with one inoperative.

So which is the real "Sea Pig" then?

My answer is neither of the above. The F-111B could do, pretty much, the Phoenix-based Fleet Air Defense (FAD) mission that it was intended to do while weighed down with Air Force low-level supersonic mission and other requirements. The F-14 could not do the FAD mission quite as well—but well enough if needs be—and it could also accomplish the carrier Navy’s other, equally important, fighter missions.
Posted by Tailspin at 7:53 PM

I note that the F-111 remained in service with the RAAF until 2010 while the F-14 was withdrawn in 2006. [I ignore the Iranian F-14s, if any remain, because they don't have a choice.] This supports the notion that the Navy erred in rejecting the F-111 and requiring the F-14.

Interesting comment Capn. I left McDonnell (Field Rep Avionics) in late 67 to go with Grumman A-6A. All I heard from Grummies was how bad the F-4 was. Used to really tick me off. I never saw what use the Phoenix was going to be after being in Thailand with 8th TFW . No BVR in all Route Pak's in N Viet allowed.

Let's keep in mind that the F-14A was only supposed to be an interim variant, with production switching to the much improved F-14B. This would have had the powerful F-401-PW-400 engines, and the actual production configurations(i.e. an APU, new flight control system, improved reliability,and maintainability features etc.) We all know how that worked out, and the Navy did get the Tomcat they were looking for in the form of the F-14D. The only reason the F-14D was retired in '06 was the program was cancelled in December of 1990, thanks to one Dick Cheney. The F-14 was living on borrowed time for 16 years without having the proper logistical support a frontline Naval aircraft requires. In the end, the maintenance headaches were too much to bear, and she was retired. This is not, in any way reflective of the F-14, but is a result of bureaucratic politics.

I was an F111 instrument /autopilot tech and instructor from 1971 to 1980. I have come to the conclusion that most of the resistance by the Navy top brass was because they didn't want the Pentagon to determine what aircraft the Navy would have. Once that is allowed it will stay that way. Also military top brass do have some hope or expectation to be hired into a great job with the company they have been doing business with ie Grumman.

That date of year 1977 for the F-14A is wrong. The first flight of the F-14A was in 1970 seven years before the year give in the above article with the first operational squadron level flights being in 1974 where they participated in the defensive withdrawals from Viet Nam, three years before the year given in the above article. The earliest F-14 SAC is also noted at time of its use in the fleet operations in 1974 and not 1977. The earliest SAC for the F-111B is 1965 and not 1967. http://www.alternatewars.com/SAC/SAC.htm

AvatarSagel.M: The later SACs were chosen for the comparison because, in my opinion, they are more likely to be representative of the weights achieved in production as opposed to those that were proposed, which are almost invariably optimistic...