Mark Frankel and I are in the process of finishing up our book on U.S. Air Force and U.S. Navy trainers, Training the Right Stuff. It will be published by Schiffer in the spring.

One major feature of the new post-World War II trainers was that they had nose wheels (tricycle landing gear) rather than tail wheels (taildraggers). Landing an airplane with a tricycle landing gear was a lot less likely to be dramatic because it was directionally stable. A taildragger was not, some more inclined to swap ends than others, but none that didn't bear watching, particularly in a crosswind. There were other advantages to the tricycle landing gear, such as being able to see where you were going when taxiing or beginning a takeoff. (For more on tail draggers and in particular the "ground loop", see http://thanlont.blogspot.com/2014/10/tricycles-are-for-kids.html

One shortcoming of an all-tricycle training fleet was that there were still taildraggers in use. However, most had dual control or dual-control variants, including the P-51 Mustang. And transitioning to a taildragger was somewhat easier if you already knew how to land. In the military, if an aviator had gotten that far, he would be less likely to be off optimal (airspeed, rate of descent, and alignment with respect to crosswind and runway) on short final and quicker to correct a problem like a swerve or a bounce.

What hadn't occurred to me, but did to Frank Williamson, was how did a Navy pilot go from the tricycle-gear T-28 into the AD Skyraider? The Navy didn't have any with dual controls (the Air Force did later on, since the AD-5 had dual-control provisions). The answer was advanced training at Navy squadron VT-30 at Corpus Christi. 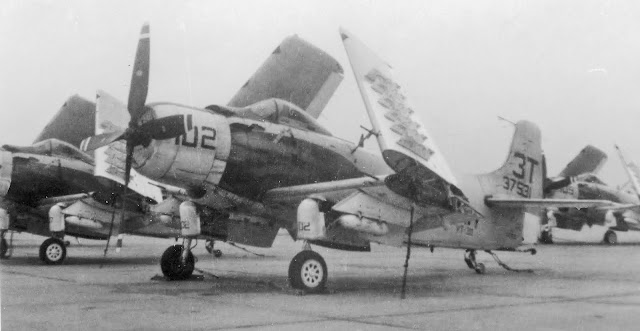 Walt Fink was one of the aviators to do so:

Been there and done that in July 1962. Skyraider "Fam" at VT-30 consisted of five AD-6 (single-seat, because that's all we had—no Fat Spads) "flights"—that in quotation marks because on the first one, we didn't ever get airborne. It was a ground exercise to acquaint us with the taildragger mentality but we prepared for it like we were going flying, with all our gear, complete pre-flight briefing, complete pre-flight of the airplane, etc. After engine start, our instructor led us from the VT-30 line to the run-up area. We followed along, spreading the wings. Once there, we went through all the checks of prop, mags, hydraulics and such. Then he led us on a taxi-around tour of NAS Corpus Christi, looking not unlike elephants on parade, so we could get a feel for what it was like with the tail wheel locked and then unlocked, making turns, etc.

The final part of that first "flight" was that each of us taxied  onto the runway and when we got permission for "takeoff", we held the brakes, stick full back, and ran the R-3350 up to 30" of manifold pressure. Then we released the brakes and without adding power, got a little feel for how much right rudder it took to keep the nose pointed straight down the runway. I don't remember how fast we actually got—enough to get the tail light, anyhow—before we aborted the takeoff and discovered how much left rudder it took to maintain directional control. Then we taxied back to the line, folded the wings, and went through the shutdown procedures. We probably spent 45 minutes or so from start to finish.

Our first real flight was the next day and lasted about two hours, terminating in one landing. The following day, FAM-2 was spent on landing practice: my logbook shows I made 11 landings that consisted of 10 touch-and-goes and one full stop. The third flight was the same and the fourth one was six touch-and-goes and a full stop. The airplane was a beautiful flying machine but it took a little getting used to landing and directional control. By the way, we three-pointed the landings; the bird was heavy enough that it stayed where it was planted.

That was it for "basic fam" but of course we learned a little more with each successive flight. Those four Fam flights were followed by two formation hops, three Tac/Acro flights, and then we got into weapons delivery, day and night navigation, night formation, instruments, and finally FCLP (Field Carrier Landing Practice) and CQ (Carrier Qualification at sea). Total AD flights in my logbook at VT-30 were 44 with no incompletes or repeats.

Robert Hansen also went through the transition: I remember adding power and when the tail lifted off the runway, we cut power. That was an exciting point because you had to change rudder to account for the change in torque. Sometimes it was very colorful and there was an occasional "ground loop". When the flight returned from the first airborne flight, instructors were known to line the windows to watch the "first" landings, which also were colorful at times.
Posted by Tailspin at 9:01 PM

Interesting as this post is, the best for me is to learn that we will be getting a new book from Tommy (and Mark) in the spring!

Owned an AD-4N for several years. What an airplane. The thing was a beast to say the least but was so fun to fly. I had to sell the airplane since 100LL was approaching $5.00 gal. and at 100 gal. per hour...well you do the math. Was a very solid machine, very solid mechanically.