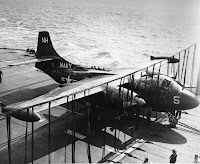 Blogdog asked about the difference between the Davis barrier and the barricade because he was aware that both involved straps. A detailed explanation is provided in my book, U.S.Naval Air Superiority, but the brief answer is that the Davis barrier was a modification of the existing barrier specifically to stop jet and twin-engine airplanes; the barricade was a subsequent addition to handle situations where the Davis barriers weren't effective. The upper photo is a fit check of an AJ-2 Savage and the barricade. The lower photo is of a fit check of an early version of the Davis barrier. The top strap is the "actuator" and is located where the steel cable was for stopping single-engine propeller-driven airplanes that didn't hook a wire. The steel cable is now lying on the deck. If the jet or twin-engine airplane arrived at the Davis barrier untrapped, the nose gear would snag the top strap. The vertical straps would then pull the cable up as the airplane continued forward, hopefully in time to engage the main landing gear struts and drag the airplane to a stop. A barrier actuator (a simple post, often extended by a spring when the tailhook was lowered) was provided in front of the windscreen to activate the barrier if the nose gear had collapsed.

There was a shortcoming. If the airplane was going too slowly when it hit the Davis barrier, the cable would fall back down before it caught the main landing gear. If the airplane was going too fast, the cable would not get up high enough, fast enough, and the airplane would roll right over it, unstopped. As it turned out, the combination of the Davis barrier and the barricade also proved to be what was needed to safely operate jet airplanes on axial decks, in terms of almost always keeping a crash from involving the people and planes forward of the barricade.

For other posts I've made on the Davis barrier and the barricade, see:

http://thanlont.blogspot.com/2008/11/most-accurate-aviation-movie-ever.html
Posted by Tailspin at 9:33 PM