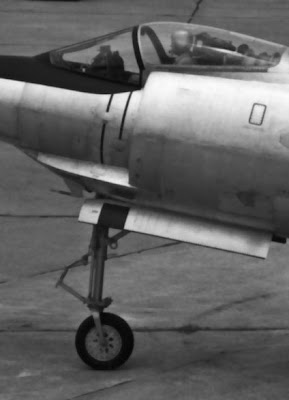 For decades, one of the requirements for Navy carrier-based aircraft was self-boarding. Ladders were anathema on a crowded, windy carrier deck full of whirling propellers and jet intakes. This became more and more difficult to accommodate with jets, particularly those with long nose gears to provide a high angle of attack for takeoff and landing. In the case of the XF3H Demon, for example, McDonnell expected the pilot to scale the nose landing gear until he could reach the hand/foot holds at the bottom of the black stripes and put his right foot on the black non-slip area on the nose gear door. After that, the ascent was fairly straight forward. 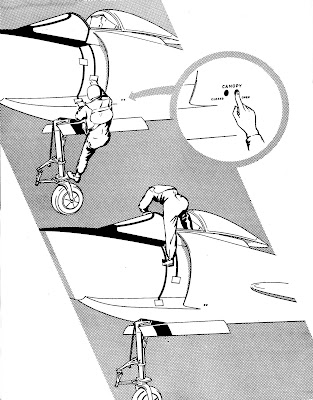 This concept was arguably more challenging than the production version shown in a prior post (http://thanlont.blogspot.com/2008/05/i-had-hoped-to-find-picture-like-this.html), which required the pilot to clamber up onto the wing from its trailing edge, walk up to the leading edge, and then traverse the fuselage from there to the cockpit by stepping on small pegs that extended out when the canopy was opened. Detachable ladders soon became acceptable and self-boarding was waived for the A4D Skyhawk and the production F4D Skyray.

Mark Nankivil provided the illustration from the XF3H Flight Manual.

For more on self-boarding, see http://thanlont.blogspot.com/2015/10/carrier-based-airplane-self-boarding.html
Posted by Tailspin at 7:12 PM