The Other McNamara Program 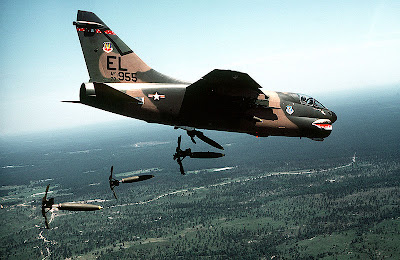 Bashing former Secretary of Defense Robert S. McNamara over the F-111 program failure to produce a joint service fighter is still a popular pastime. It's also possible that the procurement policies and practices that he implemented resulted in the subsequent inability of the services to manage programs to anywhere near their original cost, schedule, and performance targets. Conveniently overlooked by or unknown to his critics, however, is that he was more or less responsible for a joint service program that did meet, certainly when compared to current standards of achievement, its challenging contract targets including weight. It is true that the Air Force initially paid only lip service to the A-7 program and that the Navy was therefore allowed to develop an airplane pretty much in accordance with its specifications after passing a rigorous requirements and source selection review by DoD. However, the Air Force eventually came on board and at its insistence (accompanied with additional funding), its A-7D got a new engine, weapons delivery system, and gun. All of these were significant and much-needed improvements that the Navy had been reluctant to incorporate on its own dime for various reasons but was then able to do so with its next production upgrade, the A-7E.
Posted by Tailspin at 6:56 AM