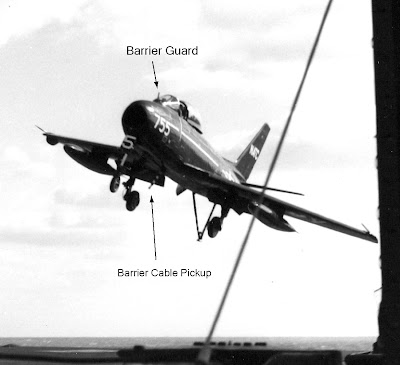 Jets weren't compatible with the barrier cable system used on axial deck carriers to protect the people and planes forward of the landing area if the tail hook of the arriving airplane didn't pick up any of the arresting wires. A Rube Goldberg creation, the Davis barrier, provided the same function by having the cables lie flat on the deck and adding an actuation strap where they were located for propeller-driven aircraft. When the jet's nose gear hit the actuation strap, vertical straps tied to both the actuation strap and the cable would jerk the cable off the deck where it would snag the main gear. A barrier guard was added in front of the wind shield to snag the strap in the event of a nose landing gear collapse.

Unfortunately, this arrangement only worked at a specific range of speeds. If the airplane was going a bit fast when it hit the actuation strap, the main gear would pass by before the cable had come up far enough to engage it; this resulted in the addition of the big barricade beyond the barriers, still used on angled deck carriers to land an airplane when the arrested landing isn't possible for some reason. If the airplane was a bit slow, the cable would come up off the deck and fall back down before the main gear arrived. Although the barricade would stop the airplane in this case as well, it was an event to be avoided since disentangling the airplane and resetting the barricade were time consuming. Instead, a barrier cable pickup was to be added to airplanes between the nose gear and main landing gear. It would insure that the cable would stay up off the deck and do its job in a low speed barrier engagement.

Only a few new aircraft were equipped with a barrier cable pickup, like the XFJ-2 shown above, before the introduction of the angled deck eliminated the barrier requirement.
Posted by Tailspin at 1:00 PM