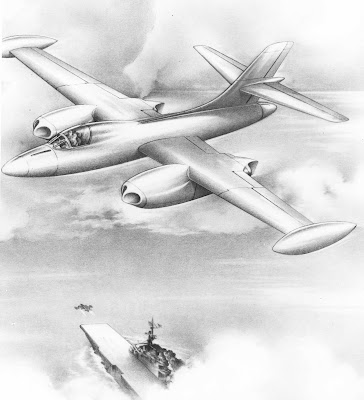 In 1946, both the Air Force and the Navy realized that they needed to develop long-range escort fighters to protect the strategic bombers in the next war, if it came to that. Neither service was actually successful in that regard, but the Air Force's efforts to develop parasite fighters (the McDonnell F-85) and long-range fighters (the McDonnell F-88 and Lockheed F-90) are well known and documented. Not so the Navy's. I had only heard about studies but seen nothing specific until diligent researcher Ryan Crierie found two Curtiss-Wright proposals in George Spangenberg's papers at the National Archives.

I'm still a little fuzzy on the details, but it appears that the Navy issued OS-112 to define the requirements for a carrier-based fighter to accompany its planned force of long-range, carrier-based, atomic bombers. The most significant number was the combat radius: 1,200 nautical miles, roughly twice that of existing carrier-based fighters. As envisioned by Curtiss-Wright, it was to be a big airplane with a four-man crew. The armament consisted of a forward and aft facing radar-directed turrets. The large pods on the wing tips were not fuel tanks, but housed search radars, one covering the upper hemisphere and the other the lower. (An alternate approach had one covering the right hemisphere and the other the left.)

The crew consisted of a pilot and copilot and two gunners, one facing aft and one forward across from each other in a compartment aft of the cockpit. Presumably the copilot was there as a relief pilot, since the mission time was over six hours for the jet version and almost eight hours for the turboprop. (As it happened, all the Navy's strategic bombers were single-piloted, with the crew consisting of a bombardier and a third man whose duties varied over time and with the aircraft type.)

The artist's concept above is the Curtiss Wright 551, which was powered by four Westinghouse J46 engines with afterburners and had a takeoff gross weight of 68,500 pounds. The turboprop version, the 538, was powered by two Allison T40s and only weighed 51,000 pounds. By way of comparison, the biggest Navy carrier-based jet fighter at the time, the Douglas two-seat F3D Skynight, weighed about half that and had a combat range, not radius, of 1,200 nautical miles. (It was actually used to escort Air Force B-29s on night missions during the Korean War.)

The operational concept appears to have been that the crew of the escort "fighter" would detect the approaching enemy interceptors with its search radars, get into position to block them from approaching the bombers, and shoot them down when they came within range of either the forward or aft turrets.

After a review of the proposals and a rethink, the Navy decided to send its bombers out on their own, protected only by speed in the case of the AJ Savage, the placeholder for the A2J and A3D that were both designed with tail turrets.
Posted by Tailspin at 1:03 AM

Brings to mind the whole ME-110 concept. Not terrible reassuring at best.