Grumman Comes from Behind to Win!

If aerospace competitions were covered on the sports page, that would have been a headline every few years for decades. As a supplier of U.S. Navy fighters, Grumman had a penchant for starting late and then catching up or winning outright, right up until they didn't. At least Northrop kept the name on the letterhead like McDonnell did for Douglas. Unlike Boeing...

Curtiss and Boeing provided all the biplane fighters for the U.S. Navy until a few years after the fledgling Grumman company spread its wings with the FF-1 in 1931. Although both kept trying, neither got a production contract for a Navy monoplane fighter, unless you count the Boeing F-18E/F, which I choose not to. 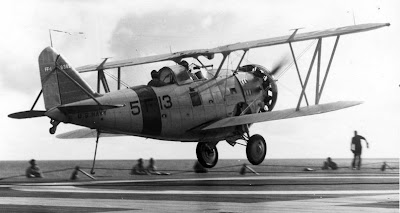 Grumman got successive contracts for carrier-based biplane fighters up through the F3F.

Grumman was tardy about the transition to the monoplane fighter. They initially received a contract for their follow-on to the F3F as a biplane, the F4F-1, in accordance with the Navy's need for a backup to the Brewster's monoplane proposal. Grumman was subsequently allowed to change the configuration to a monoplane instead, the F4F-2, but lost the resulting fly-off to the Brewster F2A. Nevertheless, they persevered and redesigned the wings, tail, and engine installation. They then won the second round and delivered a fighter that was at least a match for the Japanese Zero early in World War II. Brewster was relegated to being a second source for Vought's Corsair. 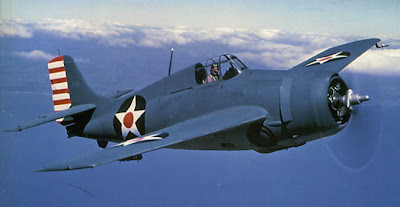 Grumman also lost the fighter competition that Vought won with the Corsair. Their twin-engine F5F might have come in third instead of second if the Allison V-1710 that Bell was using in their FL-1 Aerobonita had a two-stage mechanical supercharger instead of a single stage. (For much, much more, see my XFL-1 monograph) However, Grumman got a follow-on twin-engine contract for the F7F Tigercat that did go into production (and was primarily assigned to the Marine Corps) and a contract for a Wright R-2600-powered Wildcat derivative that became a direct competitor to the F4U, delayed by development and carrier-qualification problems, when re-engined with the P&W R-2800. 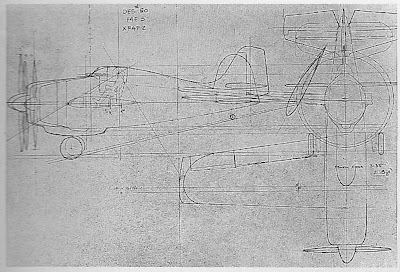 Grumman was late to jets: its D-71 wasn't selected for the second round of jet fighter development that resulted in the F2H-1, FJ-1, and F6U-1 because it already had a lot of important Navy work, for one thing. They came in second to Douglas in the multi-engine night fighter competition but still got a contract for one. The F9F-1 was becoming an even more distant second so Grumman and the Navy changed the statement of work to a single-engine day fighter, the F9F-2/3 Panther. It was a success, but had to share the decks with the McDonnell Banshee. 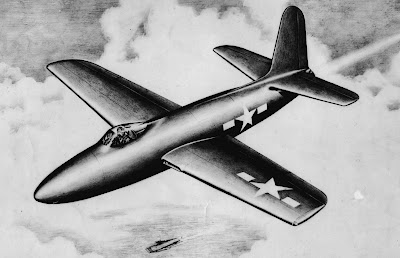 Grumman didn't just snatch victory from the jaws of defeat with its fighters. At the end of World War II, they were developing a big propeller-driven torpedo bomber with a jet engine in the aft fuselage for extra speed during the torpedo run and withdrawal. Douglas, however, got the lion's share of the Navy's attack business with its AD Skyraider (Grumman wasn't even second: that was the Martin AM Mauler) but Grumman was able to redirect its AF to be a submarine hunter and killer. 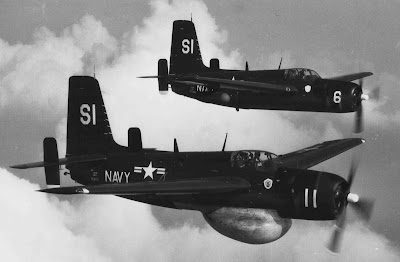 They then repurposed a previous design for a heavily armed twin-engine torpedo bomber, the TB2F, that did not proceed past the mockup stage to be the S2F (S-2), which begat the first true COD, the TF-1 (C-1) and the AEW WF-2 (E-1B). For the history of the latter, see http://thanlont.blogspot.com/2011/10/designation-story.html 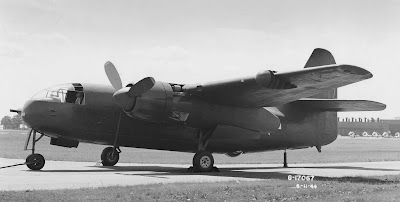 Grumman was also late to swept-wing jets. The BuAer class desk officer at the time tried to get them to design the F9F-2 with a swept wing but settled for a straight-wing development and a swept-wing study. That spiraled out of control when he left and resulted in a fiasco, the variable-sweep-wing F10F Jaguar, which was cancelled after a year of flight-test disappointments of the only one completed.

However, when the Navy became so desperate for swept-wing performance that they ordered a carrier-based modification of the Air Force's F-86 Sabre, Grumman did what they should have done in the first place: took a Panther fuselage off the production line and put swept wings and a horizontal tail on it. 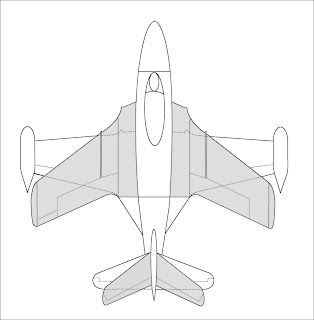 The resulting F9F-6 Cougar was more carrier suitable than the North American's FJ-2 Fury, which was relegated to Marine Corps. North American put a more powerful engine in the FJ-3 Fury, creating a pretty good carrier-based, albeit short-legged, day fighter but Grumman countered by putting a new wing on the F9F-8 Cougar, which had more endurance.

Sticking with what worked and what the boss in BuAer wanted didn't always work out. The BuAer fighter class deck officer in the early 1950s led both  Grumman and North American astray, asking for a simple day fighter: small, light, maneuverable, inexpensive, and subsonic, i.e. no afterburner. Both complied and got contracts without a formal competition. Grumman at least had the sense to insist on an afterburner for what became its little F11F Tiger. Vought won the formal competition with the F8U Crusader and subsequently, the lion's share of production. The North American FJ-4 got shuffled off to the Marines Corp as a fighter (the Navy bought an attack variant as the FJ-4B to provide Douglas with an incentive to be more responsive on A4D shortcomings as perceived by BuAer engineers) and the F11F wound up performing in airshows with the Blue Angels and training budding fighter pilots.

BuAer contracted with Lockheed to modify the TV-2 (T-33) to a carrier-capable jet pilot trainer, the T2V.

Grumman sold a backup plan to the Navy, a modification to the forward fuselage of the F9F-8T to be a two-seat prototype and demonstrator of an armed (two cannon were retained), carrier-capable, two-seat jet trainer. Unfortunately for Lockheed, it took more time  to develop the SeaStar, in part due to problems with its boundary layer control system for high lift at slow speeds, than Grumman did to get the F9F-8T in front of the Navy, which wound up buying only 150 T2Vs (T-1A) as opposed to 399 F9F-8Ts (TF-9J).

Grumman finally missed the boat completely with the Navy's next fighter program, a fleet air defense fighter armed with Sparrow III missiles. McDonnell caught a break when the Fighter Class Desk hijacked his AH program. It became the F4H Phantom. Grumman immediately submitted an unsolicited proposal for a similar airplane powered by two General Electric J79s but was forced to revise it to have a single engine and compete with Vought's J75-powered derivative of the F8U Crusader. It lost to Vought and then Vought lost to McDonnell.

Grumman did get a consolation prize at Vought's expense however. Vought won the competition for the follow-on to Grumman's WF-2 (E-1B) for AEW. From Vought's patent application:

Nevertheless, the BuAer production branch chief convinced the Chief of the Bureau of Aeronautics, Rear Admiral James S. Russell, to award the contract to Grumman instead due to industrial base considerations, i.e. Grumman needed the work. The W2F became the E-2, still in production today more than 50 years later.

Grumman got back in the fighter business as a partner to General Dynamics on the F-111 program. In my opinion, the F-111B has been unjustly maligned (see my F-111B monograph) but to be fair to those who have swallowed the Navy's PR whole and regurgitate it, the F-14 was more appropriate to the Navy's needs. Once again, Grumman made a silk purse out of the ear of a "sea pig." (I do hate that nickname.) 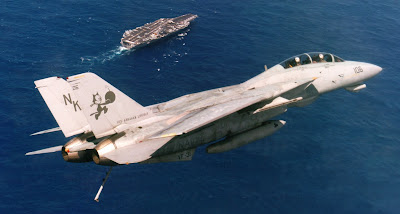 Their luck (and reportedly and more importantly their close working relationship with the Navy: see Inside the Iron Works) ran out when the Navy had to choose between derivatives of the F-14D and McDonnell Douglas F-18C/D. The Borg, er Boeing, then absorbed McDonnell Douglas and was finally back in the fighter business with the F-18E/F; Grumman had to sell itself to Northrop.

If Lockheed doesn't get its act together with the F-35C, Boeing may very well become the only U.S. manufacturer of carrier-based fighters.

For more on the development of U.S. Navy jet fighters through the F4H Phantom, see my book U.S. Naval Air Superiority.
Posted by Tailspin at 5:01 PM

You did a very good job illustrating Grumman's Carrier based fighter program, although you never mentioned the F8F Bearcat and I'm pretty sure I read that Grumman let the Brewster F2A Buffalo and F2H Banshee go so they could see all of the problems and do their best to correct them for their own production model. But overall you still did a great job and keep up the good work!

You did a very good job illustrating Grumman's Carrier based fighter program, although you never mentioned the F8F Bearcat and I'm pretty sure I read that Grumman let the Brewster F2A Buffalo and F2H Banshee go so they could see all of the problems and do their best to correct them for their own production model. But overall you still did a great job and keep up the good work!