In the early days of jet airplanes, there weren't very many air-start carts at civil airports or some military fields either. This wasn't a problem when jet engines were started with electric motors like piston engines. However, electric starters were heavy so they were replaced on many jet engines in the late 1940s by a small turbine that required high pressure/volume air that spun the engine up to start rpm.  This meant landing at an airport without an air-start cart meant being stranded until one could be located and made available.

The Navy's solution was a start unit that could be carried as a store shaped like a World War II external fuel tank, shown here on an early production Douglas F4D Skyray:

It incorporated a amall AiResearch jet engine, designed as an APU (Auxiliary Power Unit), to provide the air. Panels were opened or removed to expose the APU inlet and exhaust, the attachment of the air hose, and the control panel. 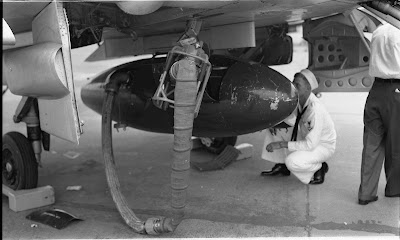 Also stowed within the cart were the hose, wheels, and a handle to pull it along like child's wagon. 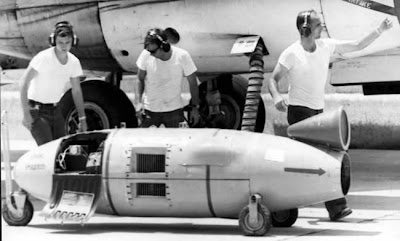 The handle also steered the front wheel and when raised vertically, braked it. One source of entertainment for the ramp rats was to start the APU up, staddle it like a horse, and push the handle forward. The thrust of the APU would start it rolling. This practice was, of course, prohibited.

The pod was often present at airshows at civil airports, carried there and back on a standard external stores pylon.

It remained useful to the Blue Angels up through the retirement of their A-4s powered by the J52 with an impingement starter:

I remember seeing those when the Blues flew the F11 Tigers.

Starter riding was pretty entertaining. You generally needed a push to get started. Little narrow track wheels made it somewhat unstable so it was a good thing it didn't got very fast. NAS Memphis 63-64.