The Navy originally bought the F8U Crusader as a carrier-based "day fighter". That basically meant that it didn't also need to be capable of finding and shooting down another aircraft in low visibility conditions, e.g. cloud, or at night. It turned out to be the last of the pure gunfighters in the Navy.

For a summary of F-8 (F8U-1/2) Crusader configurations by suffix letter , see http://tailspintopics.blogspot.com/2009/10/f8u-crusader-variations.html

The F8U-1 (F-8A) did have a small radar that the gun sight used for automatic ranging but did not provide visual assistance to the pilot. It was armed with four 20 mm cannon and 2.75-inch rockets. 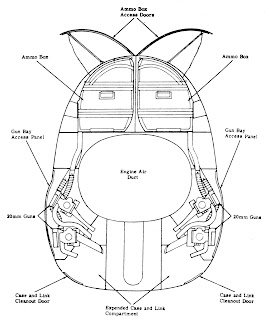 The rocket pack tilted down when the rockets were to be fired:

The rockets proved to be not only not effective except as an area suppression weapon due to inaccuracy but also downright dangerous. To maximize the number carried versus the frontal area of the pack, one set of 16 was loaded ahead of another. If a rocket in the forward set did not fire, the one behind it, when fired, might stay in the pack, still burning. Rockets occasionally did not clear the pack, which meant that it could not be retracted and could potentially keep one of the nose gear doors from opening, which meant the nose gear would not extend. 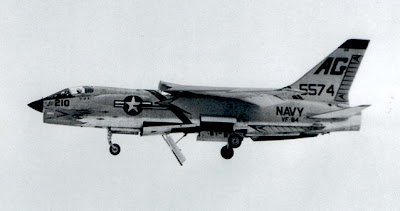 The combination of useless and hazardous resulted in them being deactivated in the fleet. For a bit more on the rocket pack, see http://thanlont.blogspot.com/2008/12/missed-it-by-that-much-ii.html

For various reasons, the Navy didn't shut off production of F8Us with the rocket pack for a while, resulting in the Controller General telling Congress in July 1964 that the Navy could have eliminated them and saved about $4 million in 1958 (about $31 million now) instead of having Vought build 306 F8Us with that capability.

Far more effective than the rocket pack, at least from an air-to-air standpoint, was the addition of heat-seeking Sidewinder missiles, first two, one on each side of the fuselage: 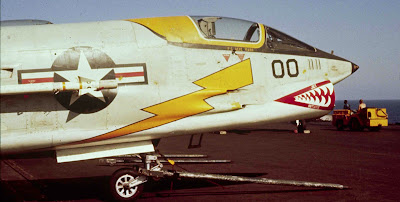 If two Sidewinders was good, four would be better. This capability was introduced with the F8U-2 (F-8C) but there were a couple of extendable legacy things that had to be avoided, the inflight refueling probe on the left side of the fuselage: 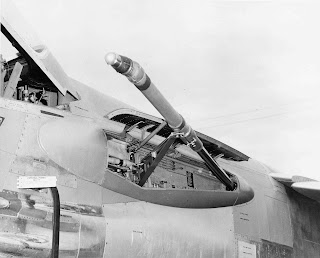 And the ram air turbine (RAT) on the right side:

As a result, the two-Sidewinder pylon on the right was not a mirror image of the one on the left and no two missiles were oriented exactly the same: 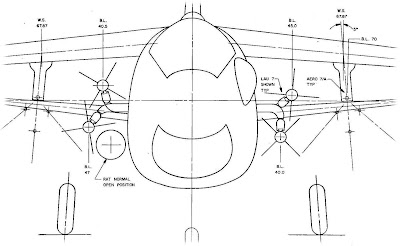 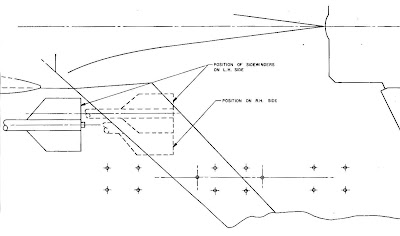 Note that these illustrations include the wing pylons added with the F8U-2NE (F-8E).

Visual-assist radar was added to the F8U beginning with the F8U-1E (F-8B). However, it wasn't going to be much of an all-weather fighter if it wasn't armed with an all-weather missile. A radar-guided Sidewinder, the AIM-9C, was developed, qualified, and deployed. It was, however, subsequently withdrawn reportedly because its envelope was too restricted and it wasn't very reliable. (I don't know why the Sparrow III capability was never incorporated.)

The AIM-9C is on the upper rail and the 9D on the lower. 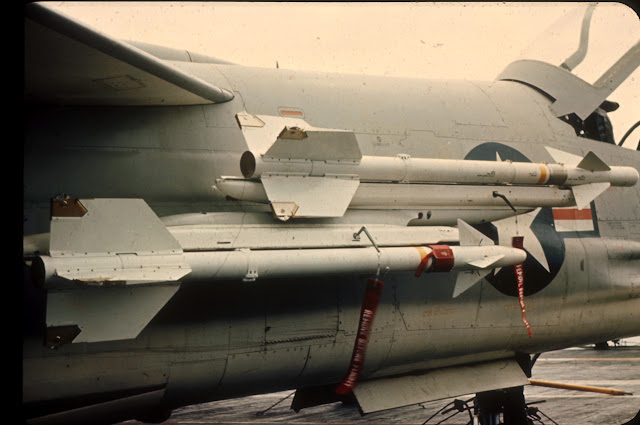 Since a carrier air group can only carry so many airplanes, general-purpose fighters that had a strike capability were preferred to one-trick ponies like a day fighter. As a result, wing pylons with a stores capability of 2,000 lbs were introduced with the F8U-2NE (F-8E) and retrofitted to the F-8Cs and F-8Ds that were remanufactured to be F-8Ks and F-8Hs respectively: 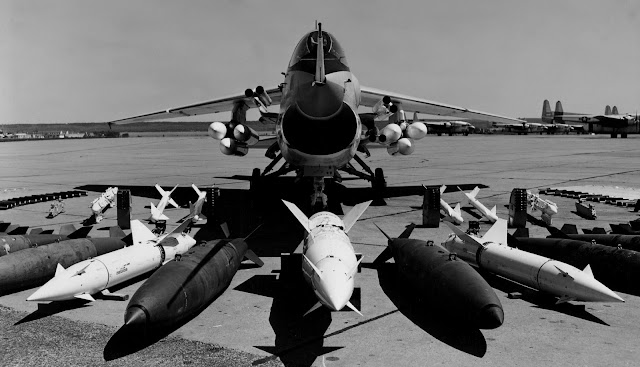 Note that although qualification of the Bullpup on the F8U began, it wasn't completed and no squadron deployed with the capability. For a bit more on that, see http://thanlont.blogspot.com/2008/10/general-purpose-f8u.html

It was apparently intended that the pylons also be used to carry external fuel tanks. Vought flight tested them but for some reason that capability was also never used in the fleet as far as I know.

For one thing, the F8U already had great endurance for a jet and for another, the likelihood of the tank hitting the horizontal stabilizer may have been off-putting. (If this was a concern, it was overcome during Vought A-7 development.)

However, the F8U was qualified to carry bombs on the pylons and two-shot Zuni rocket pods on the two-station Sidewinder pylons, four Zunis to a side.

Although carrier-based F8U squadrons fired Zunis and dropped bombs, primarily on air defense suppression missions, the shore-based Marine squadrons probably employed it in the ground-attack role to a greater degree, dropping whatever was at hand: 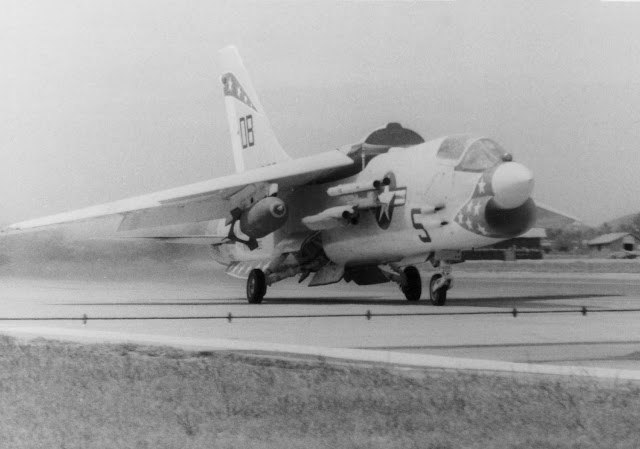 For a scaleable illustration of the pylon with a Mk 84 bomb, see http://tailspintopics.blogspot.com/2013/03/a-brief-history-of-f8u-armament.html
Posted by Tailspin at 11:12 AM

Great post! Do you have any information on how widely the 4-Sidewinder pylons were deployed and used? All the pictures I can recall of F-8s had one per side, so I assumed the double pylon was another idea that never really flew- but here I see two pictures of Crusaders with double pylons, albeit loaded with Zunis. Do you have any information on this?

There are many pictures of deployed F-8s with four-Sidewinder pylons in Mersky's F-8 Crusader Units of the Vietnam War, so I'd say they were common. It was, however, a tradeoff between weight/drag and the likelihood of getting a kill. When the radar-guided AIM-9C was carried, it was desirable to have a four-Sidewinder setup so IR Sidewinders were also available.

The choice of 2 or 4 was available and the difference was firepower or maneuverability. I was in VF-191 for 2 cruises on the Ticonderoga (CVA-14) for '67 and '68. The choice of which pylons to use was up to each squadron and we chose a third option of single pylon on one side and double on the other for a compromise between maneuverability and firepower.

Very informative as always - many thanks.
A question if I may? Some models appear to show one of the wing pylons being very slightly further forwards than the other (a matter of 2-3 inches in full scale) whereas other don't. Do you have any information on this please?

Although it was possible that there were variations in the pylon or its installation, my guess is that the kits vary slightly in accuracy. I've added a link at the end of the post to a Tailhook Topics post showing the pylon with a Mk 84 on it.

Okay, thanks for the quick response. It's a bit odd that two kit manufacturers have made the same mistake, although on the other hand, it's not unknown for them to accidentally copy each other's mistakes or work from the same incorrect source.