One of the problems with basing jet airplanes on aircraft carriers was their lack of endurance. Roughly speaking, compared to a propeller-driven airplane a jet launched carrying more than twice as much fuel and yet had only half the endurance. As a result, carrier operations assumed that when jet airplanes were launched, they were going to be back in less than two hours. If the weather turned bad or the deck became fouled, things got awkward for jet pilots pretty quickly. If there had been any jets aloft in September 1953 during a joint exercise between the U.S. and Royal Canadian Navy's when the carriers involved were beset by fog, they would have all wound up having to ditch. The ability of a propeller-driven airplane to sip fuel eventually resulted in all the airplanes being recovered. For one account, click here.

The Navy initially utilized inflight refueling in 1953 to extend the range of F2H Banshees that were capable of carrying a tactical nuclear weapon but it was soon realized that it could be used to extend the endurance of a jet airplane if required. In September 1955, the Navy announced that all of its fighters in production would be equipped with a probe for refueling in flight. This dictate was extended to all carrier-based jets. Although new designs would have retractable probes, those on existing jets were scabbed-on contraptions that could be retrofitted to ones already delivered. The Douglas F4D Skyrays wound up with a probe mounted on the nose of an external tank.

Douglas developed a "buddy" store that could be carried on a standard pylon for refueling the jets. Its Model D-704 was based on the 400-gallon version of the bomb and tank shape it had developed for low drag. In addition to 300 gallons of fuel, it contained fuel transfer and hydraulic pumps driven by a nose-mounted propeller and a reel that could stream about 40 feet of hose with a drogue on the end. Fuel could be transferred at the rate of 200 gallons per minute.

This is an illustration of the very similar Sargeant-Fletcher refueling pod which replaced the D-704. 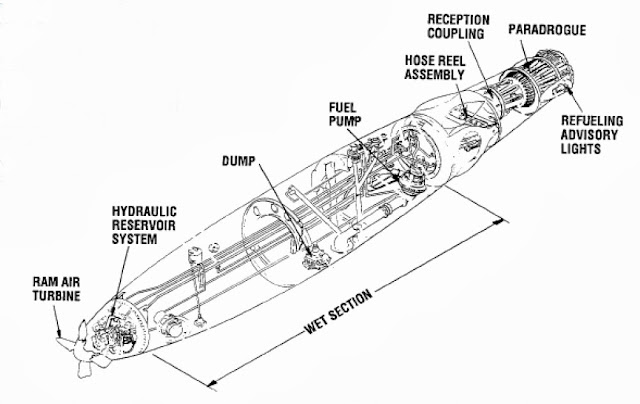 The popularity of the AJ Savage, the Navy's first nuclear bomber that could be landed aboard the carrier, increased significantly for Pacific carrier deployments when it was equipped with an inflight refueling capability.

However, the big AJ was still awkward to have on the ship and somewhat of an overkill for the purpose of providing one or two thousand pounds of fuel in extenuating circumstances around the boat. An airplane already in the air group was preferred. At the time, jets were not good candidates for the mission since they couldn't carry much more fuel than they needed for a standard deck cycle.

The tanker of choice in the late 1950s was therefore the AD Skyraider. It was just fast enough to refuel the jets (200 knots indicated was recommended but the AD could go as fast as 300 knots in a descent if necessary and could carry plenty of jet fuel in addition to its internal bag of aviation gasoline that was enough for a two-hour cycle time.

The disparity of speed performance isn't as apparent in the picture above because the F8U Crusader pilot could raise his wing for low speed flight. However, this F3H Demon pilot is hanging in there with only the slats out.

The AD had to be modified for the mission if more than the 300 gallons in the buddy pod were to be transferred. AD-6 BuNo 139744 and subsequent and all AD-7s were delivered from Douglas with the full tanker capability. Some earlier AD-6s and a few AD-4Bs (the nuclear-capable Skyraiders) were retrofitted with it. Two different configurations would be utilized, "basic" (near ship) and extended range. Both involved the use of 400-gallon drop tanks (the AD normally carried 150 or 300-gallon external tanks) that were modified with a fuel boost-pump kit. 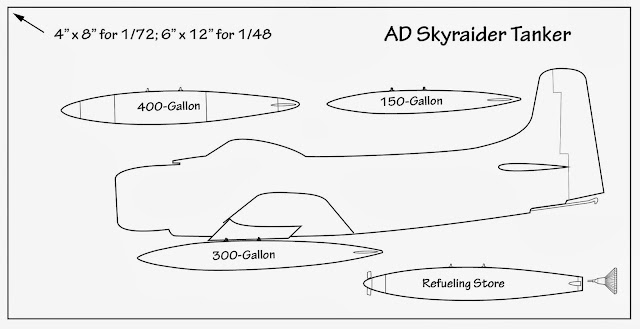 In the basic configuration, jet fuel was carried in both 400-gallon drop tanks and the 300-gallon capacity refueling store, for a total of almost 7,500 lbs of giveaway fuel. The AD pilot would remain at a 145-nm station for 30 minutes using only its 380 gallons of internal fuel. (With the maximum amount of jet fuel on board, the AD was just under its maximum gross weight.)

In the extended range configuration, the left drop tank contained jet fuel and the right, aviation gasoline. The additional gasoline allowed the AD pilot to fly considerably farther out and for longer.  However, one or the other configuration had to be selected prior to flight and care taken to insure that the proper fuel was loaded in each tank. While jets could burn just about anything in a pinch (the first jet engines burned aviation gasoline), a piston engine would stop running completely if fed jet fuel, which was basically kerosene.

Thanks to Ed Barthlemes, my go-to guy for Skyraider stuff, for much of the above.

For a follow-on post, see http://thanlont.blogspot.com/2013/12/texaco-redux.html
Posted by Tailspin at 3:03 PM

Tommy,
I have drawings of the proposed centerline pod for the F-4 to use as a buddy tanker. Do you know did the Navy ever use it? Or did they already have other aircraft to take care of that chore?

I'd be very interested to see the drawings. Douglas, Vought, North American, and McDonnell (see attached) all proposed refueling stores. As far as I know, only the Douglas and North American stores were deployed, with the latter only being used on the FJ-4B with a companion external tank. The only benefit I can think of for a McDonnell-unique store was that the F-4 carried a 600-gallon centerline tank and the Douglas store was based on a 400-gallon tank.