For some reason, I had missed getting this small book until this past week, perhaps because the title, Crossing the Line: A BlueJacket's Odyssey in World War II, sounded like a seaman's memoir about crossing the equator, almost certainly on a non-aviation ship. 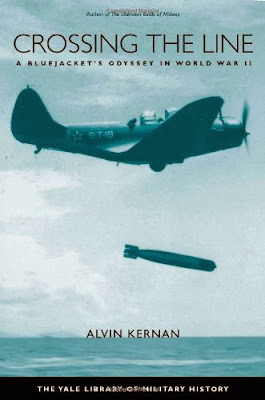 As it turns out, it is a sailor's memoir but one involving significant wartime events in U.S. Navy carrier aviation. The author, Alvin Kernan, joined the Navy in March 1941 at a teenager looking to leave a small ranch in Wyoming. He selected Ordnance as a specialty and eventually shipped out with Torpedo Six aboard Enterprise, just in time to be aboard for its return to a devastated Pearl Harbor on 8 December 1941. He soon got on flight status as a turret gunner on a Grumman TBF and eventually had to abandon the first aircraft carrier to be named Hornet when it was sunk during the Battle of the Santa Cruz Islands. More heroically, he won a Navy Cross (very unusual for an enlisted man) on the night mission that resulted in the death of Navy Ace Butch O'Hare, in spite of the fact that he might have (but probably didn't) hit O'Hare while firing at a Japanese Betty behind him.

Mustering out after World War II, he used the GI Bill to go to college and a academic career as an Ivy League professor of literature. As a result, he knows how to write about his wartime experience. If you want to read a gritty, well-written, and insightful memoir about Navy carrier aviation from the standpoint of a deckhand and turret gunner, buy this book. Note that there have been at least two editions, with the first published by the Naval Institute in 1994. The one pictured above that I read this week was published in 2007 by Yale and includes a few corrections and new material that came to the attention of the author as a result of comments on the first edition by his former shipmates and knowledgeable readers.

Kernan also wrote The Unknown Battle of Midway, which I did have in my library. It has received mixed reviews for accuracy and ill-informed opinions/statements (see Amazon) but is a pretty good read. (The very best book about the Battle of Midway is probably Shattered Sword: The Untold Story of the Battle of Midway.)
Posted by Tailspin at 5:27 PM