One More Time, The Grumman F12F

This is not the Grumman F12F:

It is the Grumman Design 118, proposed to the Navy in December 1955. The Navy rejected it because they didn't want a second development program of a fighter powered by two J79s (the McDonnell F4H was already under contract) but suggested that Grumman go back to the drawing board and propose a single-engine, Sparrow-missile armed fighter to compete with Vought's proposal for a Sparrow-armed "Super" F8U powered by the P&W J75. Grumman did on 4 May 1956.  The Navy rejected it as well in favor of what became the F8U-3 in a letter to Grumman from the Chief of the Bureau of Aeronautics, RADM James S. Russell, dated 16 July 1956, Subject: Grumman Aircraft Engineering Corporation Model 118A Airplane; proposal for: "The recent receipt of more up-to-date engine data does not alter the relative standings of your design with others already programmed in the fighter field. The Chief of the Bureau of Aeronautics had therefore determined that the introduction of another design using the same engines and comforming to the same general operating requirements cannot be justified or undertaken." Neither Grumman or the Navy ever referred to either of these two proposals as the F12F.

There was a Grumman F12F but the designation was assigned to a production variant of the F11F powered by GE's J79. Grumman had proposed its J79-powered Design 98J to the Navy in January 1955 and then its Design 98L, basically the J with increased wing area, in February. The latter appears to be the basis for the purchase order and contract in August 1955 that the Navy created for two F12F prototypes, which were to be assigned BuNos 143401 and 143402. The following artists concept appeared in the Design 98L report dated 15 February 1955.

This is the US Navy's F12F Characteristics Summary dated 15 August 1955. Although there is no drawing, the dimensions and performance data match the Grumman 98L's including the wing area of 350 square feet and the single J79 engine. (The Model 118 and 118A had a wing area of 595 square feet; the former was to be powered by two J79s and the latter, by one J75.) 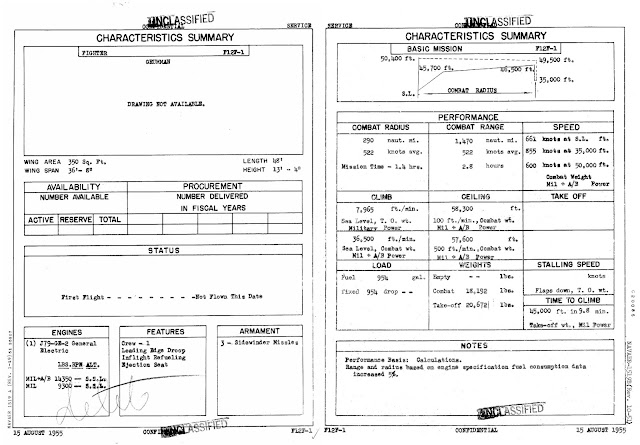 It is not clear that the contract was ever issued. It probably wasn't. In any event, it was canceled or terminated in January 1956, probably due to the demonstrated performance of the Vought F8U-1 that first flew in March 1955 and the need to fund the development of a competitor to the F4H. However, the Navy had contracted with Grumman in August 1955 to put the J79 in the last two F11Fs in the first production lot in parallel with their plan to buy the F12F. These were designated F11F-1F and were not canceled, since they would provide the Navy with J79 flight experience desired prior to the beginning of the F4H flight test program.

One or more aviation historians have inadvertently conflated the two programs and incorrectly concluded that the Navy contracted with Grumman for its twin-J79-powered Model 118 and designated it F12F. Another enthusiast subsequently speculated that it was given the popular name Lion, which some have accepted as fact as well. It was not.