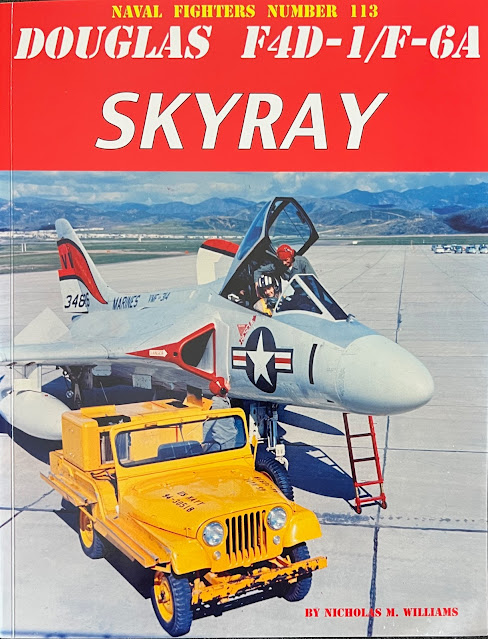 This is a long needed update of Naval Fighters 13 by the same author published in 1984. "Greatly expanded" doesn't do it justice. Forget page count or number of illustrations: this soft-cover monograph printed on high-quality paper weighs a little over two pounds! If you didn't know already, it clearly demonstrates that Nick is the most knowledgeable F4D subject-matter expert.

He covers the lengthy and somewhat troubled development of the F4D in detail, both words and pictures. For example, much of the the account of its nearly disastrous first flight was new to me as were the difficulties in adapting the F4D inlets designed for the J40 engine to the J57. Both the Douglas development and the unit-by-unit histories of Skyray evaluation and operational usage are accompanied by first-hand pilot descriptions of its performance and flight characteristics, warts and all. There are 13 pages of F4D color photos spanning its entire career from initial flight test to its use by the Navy Test Pilot School as in one student's observation, "an interesting and not particularly dangerous 'horrible example' (of unusual flying qualities)".

The monograph concludes with several color pages of F4D model kits that have been produced since the early 1950s. A section of illustrations from the flight and maintenance manuals and closeup photos of details like the landing gear will also be of interest to modelers.

One relatively new and welocome feature of Steve Ginter's monographs is a Table of Contents. It is actually more of a non-alphabetical index but very helpful in quickly finding a topic of interest in its 257 pages like the Test Pilot School quotation above.

I was somewhat surprised that Nick didn't dwell on one of my favorite airplane hobbyhorses, whether or not the F4D was the Navy's first supersonic (in level flight) fighter. (For my opinion, click HERE.) He does describe Douglas' attempts to so (the proposed top speed was Mach 1.2). There is, of course, no question that it could easily break the sound barrier in a descent when not burdened with external fuel tanks or other stores. I'm all but certain that all anecdotal pilot statements that they had been supersonic had done so in a descent or were looking at an inaccurate Mach meter.

Note: Both Nick and I strongly encourage you to buy his monograph directly from Steve, avoiding the middlemen who would otherwise enjoy a significant proportion of the sale price, not Steve. I don't know if he's still offering it at 20% off of the list price, shipping cost included (probably good for the US only) but you might ask him at 805-404-7156.