The Hell It Won't Fit II

Early on, hangar heights varied somewhat. Beginning with the Essex-class carriers and continued in the Midway-class, the height became standardized at 17' 6", which set the maximum height above deck of the folded wing tips. When the much bigger multi-engine nuclear-strike airplanes were added to the carrier's air groups, the vertical fin had to be folded as well. The first of these was the North American AJ Savage.

In the original layout, the tips of the folded vertical fin, the horizon stabilizers, the folded wing, and the propellers were all about 16 feet above the deck, well within the hangar overhead height limit. (A  clearance of about a foot was desired to accommodate variations in the airplane's "sit" caused by flat tires, shock strut pressure, fuel and bomb load, etc.) However, tip tanks had to be added to the design to address a deficiency in range, resulting in a significant reduction in clearance, as depicted in the drawing above and the picture below. 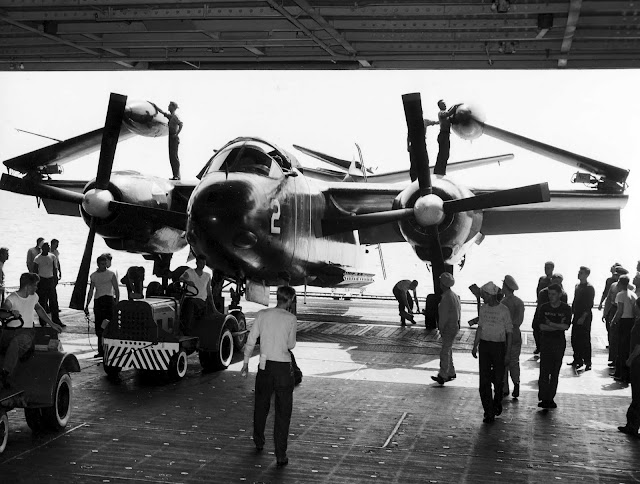 Sailors are positioned on the wings to insure that the tip tanks will clear the opening to the hangar deck. Also noteworthy in the picture:
- To minimize weight, power folding was not incorporated. In order to fold the wings and vertical fin, hinges with a hydraulic actuator had to be bolted to the wings and a manually operated screw-jack actuator had to bolted to the tail. Note the ladder which was hung on the aft fuselage to provide access to the fin for the latter installation.
- Sailors with chocks are poised to place them athwart the wheels if necessary to stop the aircraft in place.
- Two tow tractors are ganged together to provide the horsepower to pull the big Savage into the hangar bay.

In any event, the AJs were rarely folded, much less taken to the hangar deck. The process of folding the airplane was determined in Board of Inspection and Survey trials to take 16 minutes with a four-man, well-trained crew, on land, with negligible wind. The time increased significantly when it had to be accomplished a pitching, windy deck. As a result, a Savage was only folded and taken below when it suffered an unfixable casualty and needed to be gotten out of the way. (Note that the tip tanks have been removed.) 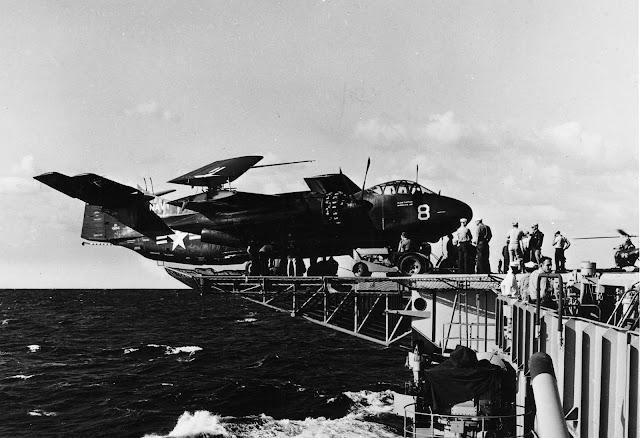 Same era as the P-80's characteristic non-centered tip tanks... a tank biased towards the upper surface of (or entirely above) the wing would greatly mitigate the clearance issue. It'd probably have higher interference drag, but it's not entirely clear to me how much we knew about interaction effects at the time. Properly shaped they might do just fine (looking at a Cessna 310).

Do you know of any effort towards more irregular tip tanks? Were AJ's real tanks droppable? These surely would not be.

I don't know of any effort to minimize the height by shaping the tanks or mounting them above the wing tip. As far as I know, the AJs' tip tanks could be jettisoned. That would be helpful in an engine-out situation occurring soon after takeoff. However, I vaguely remember that the tiptank provided a beneficial endplate effect and so were retained when empty.

My dad was plane captain in a VC-8 aj-1 savage when it crashed during an emergency landing attempt naples 20 july 1955. My dad and pilot/co-pilot were lost. I read your info, being 12 in '56; I was 9in 7/55. I'm thrilled to see these photos; after years of searching for info about my dad, the crash, and the aircraft, the rewards have been few. I happened to google uss hancock aj savage, to get here. Lots more to look at. Yours is the best. Greg Bishop (son of Earl C. Bishop), California. konabish@hotmail.com

Google brought me here too. My dad, Billy Raybon 3rd electronics div., was also in VC-8 and worked on AJ-1's. I have his cruise book from 1953 so I looked and found Earl Bishop 1st line div. Sorry to hear of your loss Greg. My dad passed in 2014 in retirement after a career at Lockheed. His original hire was because the auto-pilot on the AJ was similar to the one on the B-47 that Lockheed was building for Boeing in '55. I am David Raybon at d_raybon@bellsouth.net