Snapshot of A Transition II 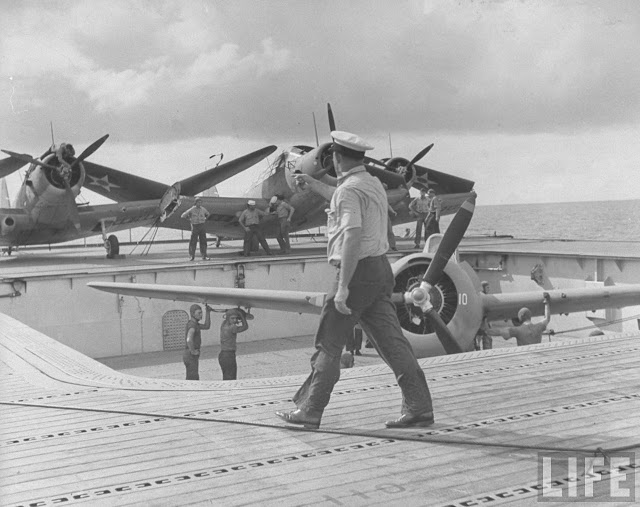 Somewhere in the Pacific early in World War II, a Grumman F4F Wildcat is on the elevator of an aircraft carrier with three Douglas TBD Devastators on deck behind it. The big three-man TBD torpedo bomber has power-folding wings to increase the number that can be accommodated aboard, the first U.S. Navy carrier-based monoplane to be so configured. Like almost every other carrier-based airplane up until the start of the war, this model of the Wildcat, the -3, does not have folding wings.  The F4F-4 will, like almost every carrier-based airplane the Navy procures thereafter with one famous exception. 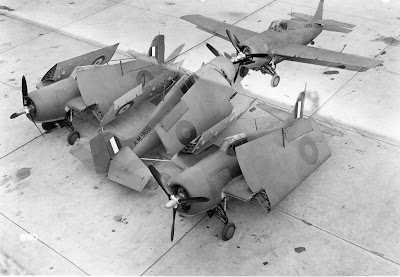 The folding wing meant more than doubling the number of Wildcats that could be stowed aboard. Although it looks like the fold joint must be double hinged, the outboard wing panel actually pivoted on a single axis tilted aft and outboard. The concept was famously developed at Grumman by using a drafting eraser for the inboard wing stub and a bent paper clip simulating the pivot axis and outboard wing panel. 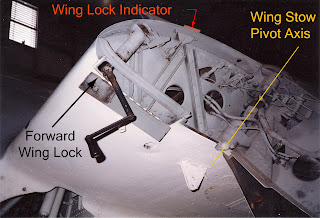 The crank handle did not fold the wing. It pulled the pin that locked the wing in the flight position and extended the wing lock indicator to the unlocked position.

The U.S. carrier Navy was about to be devastated by the TBD losses at Midway. Its withdrawal from combat use in favor of the faster Grumman TBF Avenger torpedo bomber was already a foregone conclusion, however. It was a sad end for an airplane that only five years earlier was the most technically advanced airplane in the Navy's carrier-based arsenal.

The Chief is striding past an arresting cable that has been temporarily repositioned to allow the inline elevator to be used. Note how much smaller in diameter the cable was when airplanes weighed much less than 10,000 pounds on landing and stalled at 70 knots or less.

It is likely that this is the forward elevator on a Yorktown-class carrier (Yorktown/Enterprise/Hornet). Early on, some carriers had a second set of arresting gear for over-the-bow recoveries in the event that an airplane had to be landed with the deck configured for launch, the aft end of the deck had suffered combat damage, or its inline elevator had suffered a casualty while not full up. (Presumably, the Wildcat pilot here is making a message drop.) 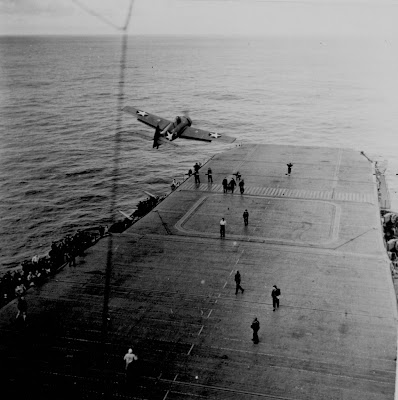 The over-the-bow recovery capability, like non-folding wings, would soon disappear from the carriers.
Posted by Tailspin at 5:05 PM

I just wanted to tell you how much I enjoy these posts, both for the information and the outstanding photos.