This assessment is based almost entirely on a 1/50th scale model in the Grumman History Archives on Long Island. 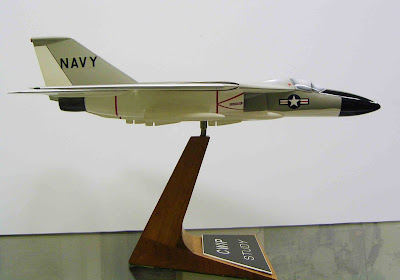 The empty weight proposed for the F-111 was even more optimistic than usual in winner-take-all paper competitions. As is customary, Grumman and General Dynamics initiated a two-pronged F-111B weight reduction study effort, the Super Weight Improvement Program and the Colossal Weight Improvement Program, even before first flight. Roughly speaking, the ground rules for the SWIP were to reduce the weight but not significantly depart from the design and mission requirements. The CWIP allowed a great deal more flexibility, basically tossing out anything imposed only by the Air Force low-altitude strike mission and preferences like the crew escape capsule. 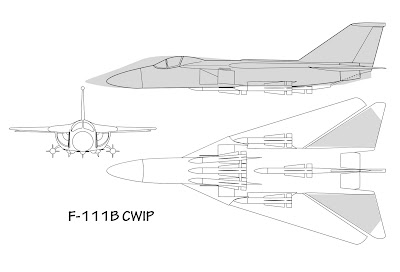 For the CWIP configuration, Grumman engineers deleted the bomb bay and escape capsule and reduced the volume required for the main landing gear by not allowing for the large low-flotation tires required for operation from unprepared fields. That enabled them to shorten the forward fuselage by about five feet. The shorter forward fuselage presumably allowed them to delete the ventral fins, with the original vertical fin now adequate for directional stability even at high angles of attack. However, the horizontal stabilizers were slightly increased in size, presumably for improved low-speed handling qualities for the carrier approach.

All six Phoenix missiles were now carried on the fuselage, four semi-submerged and two on short pylons on the lower sides of the fuselage. This arrangement eliminated both the wing pylons and swivel mechanisms required to keep the missiles aligned when the wings were swept. I haven't yet found any information on the main landing gear configuration change required by putting two missiles on the centerline of the belly, but presumably it resembled that on either the Grumman F11F Tiger or the North American A3J Vigilante.

The center fuselage with the engine inlets and wing mounting structure were basically unchanged except for the main landing gear bay. The wings were also unchanged. The engines appear to have been moved forward by about two feet to restore the center of gravity after the nose was shortened.

Although the canopy appears to be bulged upwards, my preliminary assessment is that the visibility over the nose was no better than it was on the original F-111B, which was determined to be unsatisfactory. However, the lower weight would have resulted in a lower angle of attack for the same lift, possibly providing the same over-the-nose visibility improvement as the raised cockpit that was eventually required.

The government program team elected to incorporate most if not all of the SWIP changes in the 12th F-111A and the 4th F-111B. The CWIP specification changes stayed on the drawing board until Grumman was able to apply them to what became the F-14.
Posted by Tailspin at 6:30 PM

Very interesting review of the Grumman work. Thanks for the post.

Did Grumman ever document the WIP program and how it functions?

Very interesting. I like it a lot more than the F-111B as originally envisaged. Still, it doesn't look like it could hold a candle to the F-14A, and especially not to the original F-14B.

FYI, either you mean "high-flotation tires", or you mean "low-pressure tires". "Low-flotation tires" would be tires that sink into soft ground very easily, i.e. small, hard high-pressure tires. Big fat tires are high flotation, becaause they spread the weight better and "float" on a soft surface, and they are also usually filled to a lower pressure. They are known by both terms, and I think you mixed them up.