Once Upon A Time

I rediscovered an interesting report in the Vought archives this week, Notes on Comparison of Carrier and Land-based Fighter Airplanes Incorporating Folding Wingtips dated 21 March 1952 and authored by John H. Quinn Jr. I had previously copied it from the George Spangenberg collection in the National Archives but hadn't taken the time to examine it closely.

The folding wingtips aspect of it was only of passing interest to me because it was never incorporated on a produced design, at least not for the original purpose, which was to provide a high aspect ratio wing for cruise flight with the wingtips lowered and a low aspect ratio wing for combat maneuvering with the wing tips raised as shown in the following artists concept. 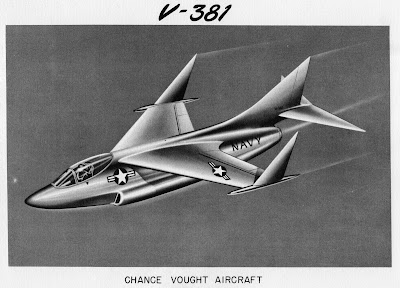 Vought submitted an unsolicited informal proposal to the Navy for the V-381 which incorporated the feature in September 1952. The Navy passed, having already given Douglas a contract for the A4D Skyhawk.

"It was assumed the airplanes were powered with a single J67W-1 engine... and were designed to combat radius of 600 nautical miles, approximately." The J67 was the designation of the Curtiss-Wright license-built Bristol Aero Engines Olympus; it was projected to provide 21,500 lbs of thrust. The mission radius was, of course, selected to highlight the cruise benefit of the folding wingtip feature.

At the time, carrier airplanes had to be designed for launch from the existing hydraulic catapults and recovery using the Mk 7 arresting gear; tactical airplanes, as opposed to the big nuclear bombers, could not be any longer than 56 feet (for straight spotting on Essex-class elevators) or taller than 17 feet and more than 24.4* feet wide when folded. (The folded height and width were Essex-class hangar deck constraints.)

Although there was no dimensional restriction on the land-based airplane, it was required to operate from a 5,000-ft runway with the takeoff roll not to exceed 3,000 feet. (Sounds short, but according to the F-100A Standard Aircraft Characteristics chart, it had a ground roll of 2,970 feet at its maximum gross weight of 29,000 lbs.) It was also required to have a combat ceiling of 55,000 feet as another constraint on wing loading. (The F-100A was bit short on that and woefully short of the range, not having folding wingtips.)

Because of the lift and size limitations imposed by the existing carrier-basing ground rules, the first carrier-based design was predicted to be 200 knots slower than the land-based one at 35,000 feet, about Mach 1.7 and 2.0 respectively. Analysis indicated that only two of the carrier-basing imposed constraints, takeoff wing loading and overall length, were the cause of the difference. The newly invented steam catapult was projected to eliminate the wing loading penalty; diagonal spotting was suggested to allow for more length and provide a better fineness ratio for less drag. The result was parity of performance with land-based airplanes. (It was recognized that the longer airplane would result in fewer being accommodated aboard, a shortcoming for carrier-basing.) 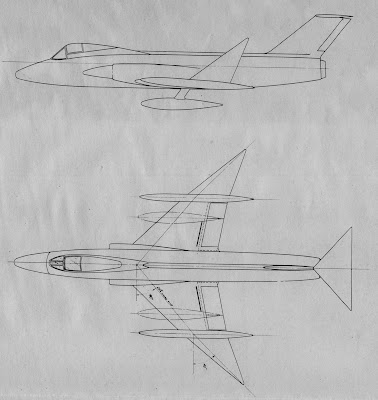 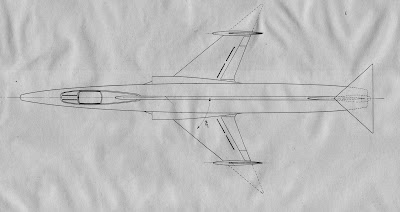 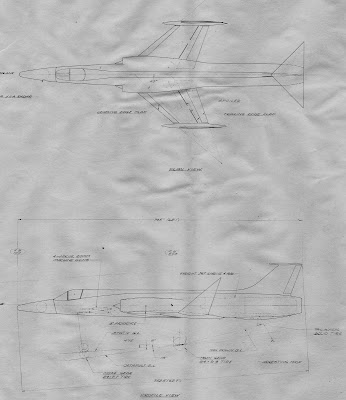 As it happened, the F8U-1 achieved parity (even superiority) with the F-100, also powered by the P&W J57, based on the benefit of the steam catapult alone. (It was just within the 56-foot length limit.) The F8U-3 exceeded 56 feet in length by a little less than three feet but it had Mach 2 performance in part due to the rediscovery of the area rule by Whitcomb in 1952; it too had performance parity with the land-based J75-powered fighters.

*The maximum folded width was in the process of being increased to 27.5 feet, in part perhaps to allow the Douglas A4D Skyhawk to go below without having to fold its wings.
Posted by Tailspin at 6:01 PM