The Davis Barrier, One More Time

For background and other information on the Davis barrier, see the following entries.
22 September 2008
1 October 2008
26 September 2009
4 October 2010
One of these days, I'll combine all this into one entry.

The FJ-2 and -3 Furies had a retractable barrier pickup device located aft of the nose gear wheel well. This insured that the activated barrier cable did not fall back down before it engaged the airplane's main landing gear struts. (It was subsequently removed from at least the -3s when the angled deck eliminated the need for the Davis barrier.) 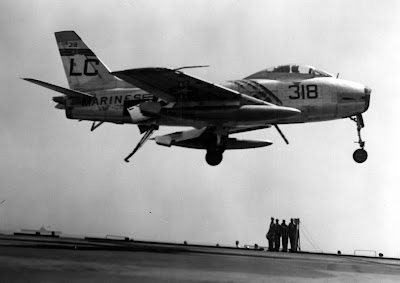 There is a similar, albeit non-retractable, device on the belly of the Grumman S2F. I had assumed that it performed the same function, but it turns out that it corrected a different problem related to the Davis barrier function.

The initial S2F Davis barrier qualification at Naval Air Material Center (NAMC) had actually been accomplished with an F7F that had been modified with tubing shaped to simulate the S2F-1 belly. Surplus F7Fs were plentiful and surplus S2Fs, not. Moreover, in the interest of minimizing cost, nose-high, off-center, and lifter strap run-down by a dual nose wheel landing gear (the F7F had a single nose wheel) were not evaluated.

In early 1954, during one of the first S2F squadron carrier qualification periods aboard Siboney (CVE-112), a pilot failed to lower his tail hook, which wasn’t noticed by anyone on the LSO platform as it should have been. This guaranteed a trip into the barriers. The airplane also engaged nose high, which didn’t help matters. Things went badly after that. The cables didn't engage the left main landing gear as they should have. The nose gear failed when the airplane pitched down and the right wing was torn off when the airplane was yanked violently around by the engagement of only one landing gear strut by the barrier cable.

S2F-1 BuNo 129146 was therefore assigned to NAMC to provide a more representative test article for a series of more comprehensive tests. It was catapulted, unmanned, into a Davis barrier at speeds from 35 to 70 knots in five-knot increments. Normal, nose-high, and nose-low engagements were made as well as at 17 feet off of centerline. A total of 129 shots were accomplished between 30 May and 23 November 1954 to develop a configuration that provided a higher likelihood of a benign barrier encounter.

One of the problems encountered was that on a nose gear with two wheels, a lifter strap could conceivably be caught between them, preventing the lifting of the barrier cables. The S2F also had a relatively short wheelbase and a wide tread, which meant the cable might not always rise high enough across the width of the tread in time to engage both landing gear struts. If only one strut was engaged, a violent yaw resulted as it had in the Siboney incident.

S2F changes established during the testing included the addition of four pairs of small detents on a strengthened nose wheel door so the actuator strap would not slip down, affecting the rise of the barrier cable. The nose gear strut torque arms were modified and the tow fitting between the wheels was extended forward to reduce the likelihood that a lifter strap would be trapped between the nose wheels. A slanted fairing was also added ahead of the catapult hook so there was less likelihood that the cable would be deflected downward and not engage the main gear struts.

Most importantly, a cable scoop, the “Fosdick,” was added on the bottom of the fuselage. Unlike the one on the FJ-2/3, it was not just there to keep the barrier cable up off the deck. It was primarily there to reduce the drag loads of the barrier cables on the landing gear and the violent yaw that would result if only one main landing gear was engaged by the cables, assuming that the cable scoop was engaged as well.

Here is an early S2F, flying with one engine shut down and the propeller feathered. Note that the only protuberances on the belly ahead of the retractable radar dome are two radio antennas and the catapult hook.

This is the belly of the S2F after the addition of the detents on the nose gear door, the fairing ahead of the catapult hook, and the cable scoop.

The existing main landing gear "scoops" were also modified to be more effective at diverting the cables onto the struts. 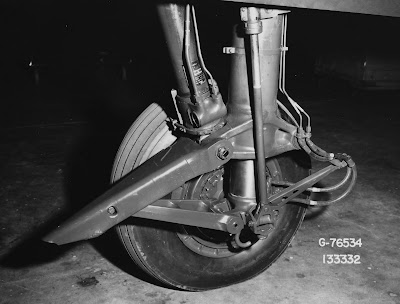 Steve Ginter is working on an S2F-1 monograph for publication in his Naval Fighters series.
Posted by Tailspin at 10:43 PM