Early in 1946, BuAer had solicited proposals for a high-speed (jet) day fighter defined by Outline Specification 105. Cdr A.B. Metsger was the fighter class desk officer. According to his unpublished memoir:

“At that time no representative airplane had flown with significant sweep. Extensive wind tunnel data, mostly captured German reports, gave us reasonable confidence at operating speeds, but there were no data to insure satisfactory low speed flying characteristics—essential in carrier operations. “

Captain Walter S. Diehl, BuAer’s chief aerodynamicist, expressed doubt to Metsger that useful low-speed data could be obtained in subscale wind tunnel testing. However, Ivan Driggs, Head of Design Research, suggested an airplane could be built for that specific purpose quickly and economically.

Metsger therefore called his contacts at four aircraft companies that he thought would be interested in building a low-speed, swept-wing demonstrator. Bell proposed a 10-week, $100,000 modification of two surplus Army Air Force P-63As; Grumman, an ugly modification of an F4F Wildcat, including a nose landing gear, and a more expensive, all-new design that included a second seat for a test engineer and the capability to be configured with both swept and straight wings. 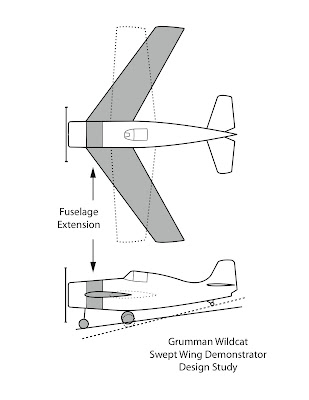 Grumman assumed that if a swept wing were to be substituted for a straight wing on an existing airplane, it would have to be positioned further forward so that the location of the mean aerodynamic chords was not changed. 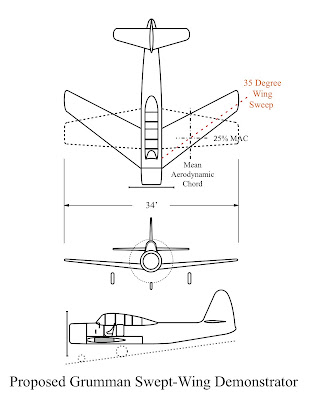 With its tricycle landing gear, the Bell P-63 already resembled a jet airplane in configuration.

The Bell-proposed approach consisted of modifying the outer wing panels to attach to the center wing stub with a 35–degree sweep and zero dihedral. In effect, this moved the wings slightly forward relative to just mounting them at the side of body but not nearly as far forward as Grumman thought was required. Bell engineering calculated that the removal of the cannon and machine guns mounted in the P-63’s nose and the ammunition along with the addition of ballast in the aft fuselage would suffice to move the center of gravity aft so that a minimal forward shift of the wings would be adequate.

Slats were considered to be a very important part of providing adequate lift with a swept wing so the wing leading edge was modified to have five separate slat sections, any of which could be configured open or closed for flight. In the following picture, the four most outboard slats are open and the most inboard one is closed. 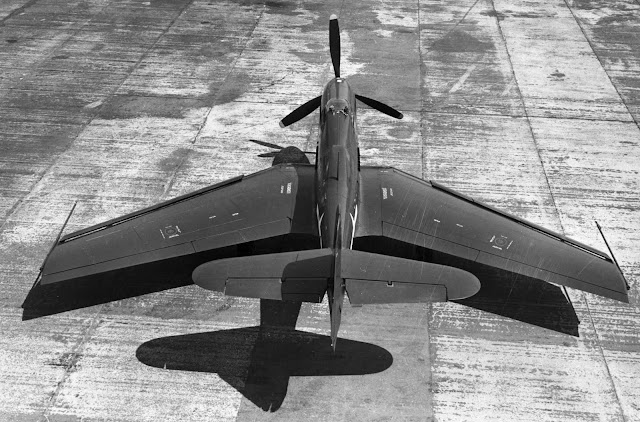 The aft part of the canopy was closed off for research instrumentation purposes. A panel with several gauges was mounted aft of the canopy door frame with a camera to photograph it. 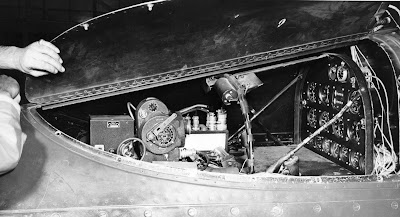 This setup recorded data from instrumentation including those on booms mounted on each wingtip. The wings were marked with white lines and tufted so that cameras mounted on the canopy and horizontal tail could record the direction of the air flow as the airplane was stalled.

Since only low-speed flight characteristics were to be evaluated, the main landing gear attachment was reoriented but not required to be retractable. The wheel wells were covered over. The nose gear was still retractable. 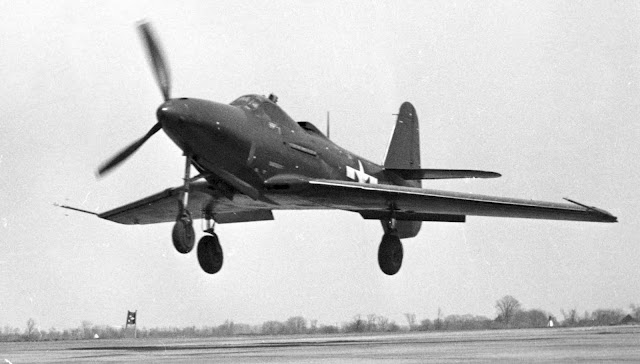 Bell had referred internally to the aircraft as the XP-63N but the Navy formally designated it L-39 on 19 April 1946. This was consistent with the Navy’s practice for research aircraft, with the L being the letter assigned to Bell by the Navy and 39 being the Bell design number, as opposed to a model number. However, the number of at least one of Bell’s L-39 flight test reports began with 33, which was the model number of the early P-63s. L-39-1 was assigned BuNo 90060 and L-39-2, BuNo 90061.* (For more on U.S. Navy research aircraft designations, click Here.).

First flight of L-39-1 was on 23 April 1946. At some point, a lighter three-bladed P-39 propeller was substituted for the four-bladed P-63 propeller and a ventral fin similar to the P-63C's was added.

Eight flights were made by 3 May, when it was briefly laid up to incorporate a four-foot plug in the aft fuselage and a large ventral fin. The plug also reduced the stabilizer incidence by four degrees, building in more nose-up trim. The changes improved the longitudinal and directional stability.

Flight tests with different slat configurations quickly established that the stall characteristics with no slats extended were very poor: no warning and an abrupt and significant roll off. With most outboard (20%) slats open, there was no improvement. With the two most outboard (40%) slats open, there was some improvement. There was significant improvement with 60% and 80% slats, with excellent stall characteristics, as well as with a 40% slat configuration with the most outboard slat closed and the next two inboard open (60%-20%) as shown here. 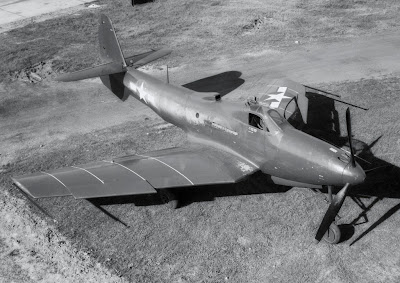 With 100% slats, however, the airplane response was so bad that the test pilot recommended that testing with 100% flaps “be discontinued until further wind tunnel spin data is obtained.”

L-39-2 first flew on 29 May, configured with the fuselage plug and an even larger ventral fin. 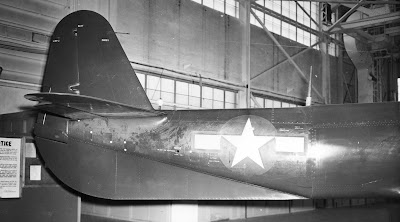 It was also equipped with an automatic fuel distribution equalizer to maintain a desired center of gravity. It was used to evaluate a slightly different slat configuration with a narrower slot.

After Bell's short development program was complete, both aircraft were made available for evaluation flights by Navy and industry pilots. At one point, L-39-1 was configured with a "good" slat configuration and L-39-2 was set up with no slats, so pilots could make back-to-back evaluation flights. Grumman test pilot Corky Meyer flew the L-39s in late June 1946: "My flight ... with no leading-edge devices was short. It cavorted like a cat on catnip during the stalls and required excessive altitude for recovery. The second ... with leading-edge slats was docile during stalls and accelerated stalls. These stalls could be done with little wing dropping and the usual loss of altitude. The two prototypes made it clear that slatted, swept wings would provide carrier-suitable flight characteristics and stall-speed performance for fighters."

Flight test and evaluation using L-39-1 was completed at Bell on 26 August 1946, after which it was ferried to NACA Langley, Virginia, for a wind tunnel and flight correlation test program.

That concluded the Navy’s participation in the program. According to Cdr Metsger: “Our flights, including simulated carrier approaches and landings, assured us that sweeping the wings would not adversely affect carrier operations. We had the data in time for our (day fighter) competition evaluation.”

L-39-2 was repurposed in mid 1946 to support Bell’s X-2 program. The wing was modified to represent a swept wing with a circular-arc airfoil and the leading edge was extended forward to the side of body.

Bell engineering failed to appreciate the aerodynamic implications of a planform change. The center of lift was shifted far enough forward that the test pilot made most of the short flight on 20 July 1946 with full forward stick. Following reballasting, including reinstatement of the heavier four-bladed propeller, it was used by Bell for low-speed handling qualities and performance evaluation of the X-2 wing. L-39-2 was ferried to NACA Langley on 11 December, where it remained for three years. In December 1949, both aircraft were reportedly transferred to NACA Lewis where they were scrapped.

For drawings and other information of interest to modelers, click Here.

*The Navy History Center lists these two BuNos as P-63s that were cancelled.
Posted by Tailspin at 9:42 AM

I have often wondered what performance could have been derived from the L-39 if the Navy, NACA, or Bell had decided to explore the high speed characteristics of the swept wing on a propeller driven aircraft.

Thinking about this has brought me to the conclusion that a P-63 modified to a swept wing retractable landing gear configuration and the turbo compound Allison V-1710 it was supposed to have been powered by would be a great racing plane.

I'm sure I'm not the only one who feels the P-39 and P-63 could have been outstanding if they hadn't been officially interfeared with. I doubt this will happen but, in my mind it is worth considering. In this economy it would a challenge but, if a syndicate were formed to raise the money from sponsors and a first class project manager (Darly Greenameyer?) was hired to manage the construction and testing just think about the possibilities.

Hi,
Thank you for a very interesting website! A search for the swept wing Bell P-63 lead me there and I ended up reading the entire site.
I have a question about the Chance Vought F7U-3 Cutlass that has bugging me for a very long time. The XF and F7U-1 ailavators have sharp trailing edges like most other aircraft. The trailing edges of the F7U-3 are blunt; with the spanwise trailing edge inset cap perforated with holes the entire length.
The only reference in all the literature I have and can find on line is on page 3 of your Navel Fighters Number Six, right hand column half way down that says that the trailing edge of the ailavators was widened in the F7-3 from 1 to 4 inches.
Can you explain why? There are a number of aerodynamic reasons that could explain it but I would like to know for sure!! Seems trivial, but it was a major modification and there is no explanation anywhere I can find. I am very interested in flying wings in general and their aerodynamics in particular……
PS

I appreciate the details about the slatted swept wing L-39.

I liked the comment about the potential for Bell.
The Me 262 had swept wings originally to balance tail-heavy cg.
But then, post-war jets were all straight-wing. Go figure!
I can easily see the XL-39 with a jet J31 motor off the Bell XP-59, in the engine bay and coming off the Kingcobra production lines with less time wasted than the competition.
A jet-powered swept-wing Cobra would be hard to beat for all the straight-wing jets.
Bell had the fist US jet and rocket planes. Now the swept wing!
Instead, Bell goes out with the failed XP-83 straight-wing twin jet escort whale. I like that it considered 4x20mm Hispano cannons like the RAF Meteor.

The P-80 could have faced a great Cobra contender from Bell with a J33 jet engine from that XP-83. The Cobras were jet ready with the aft-engine and tricycle gear already proven.

Alternatively, how about a swept-wing XP-83 with a rocket ala Me 263. It would have far more endurance than that Luftwaffe rocket.

The swept-wing MiG-15 in Korea would've had some more worthy early contenders from the USA before the belated US swept-wing F-86 Sabre jet saved the day.