Paul Faltyn of the Niagara Aerospace Museum recently provided me with some Bell Aircraft artists concepts of a marinized P-39 Aerocobra. 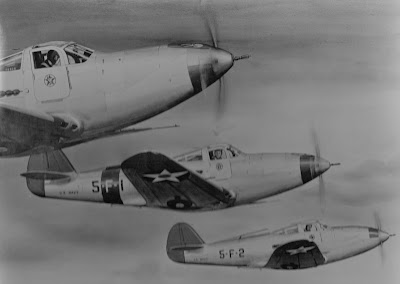 They are in the colorful U.S. Navy pre-war markings that identified which carrier the airplanes were operating from, the squadron (in this case VF-5), and the individual aircraft's relative position in the squadron. Note that there is no national insignia on the fuselage. If you look closely, the main landing gear is aft of the main wing spar, indicating that unlike the carrier-capable P-39 subsequently proposed to the Navy, this airplane had a tricycle landing gear.

This is verified by the illustration of a takeoff from an aircraft carrier. 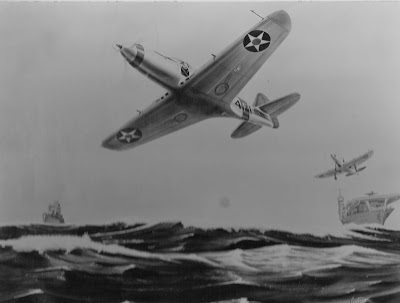 Even more interesting, and hinted at by the extension of the carburetor inlet fairing evident on close examination of the first illustration above, is what appears to be a turbo supercharger in the following cutaway drawing. 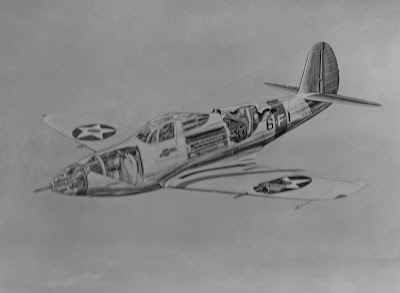 The P-39 was originally supposed to have a turbo supercharger for maximum performance at altitude. The XP-39 first flew with one. Following an analysis of flight and wind-tunnel test results, it was deleted. Bell proposed what became the Navy's FL-1 without it, along with a change to a conventional landing gear and other changes. 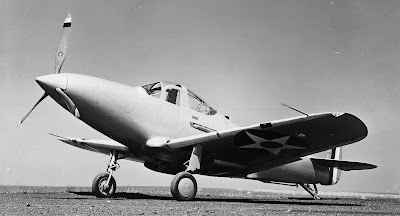 The Allison engine incorporated a single-stage, single-speed supercharger. This meant that power dropped off after 12,000 feet, significantly handicapping its speed and climb performance relative to fighters powered by engines with additional supercharging 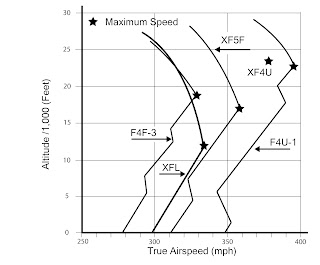 It probably wouldn't have made any difference to the outcome of the Navy fighter competition in which the Bell FL-1 was entered, since the turbo-supercharger would have added weight and required an even more significant redesign to the basic P-39 than the changes that resulted in the FL-1. However, if the Bell engineers could have come up with a way to do it, then the FL-1 would have had performance at altitude superior to the Grumman F4F Wildcat and might possibly have been the successor to the disappointing Brewster F2A Buffalo instead of the Wildcat.

For what really happened with the Bell FL-1, see my monograph on the Airabonita published by Steve Ginter and also available from Amazon. 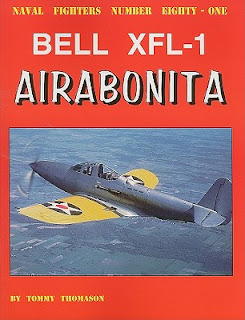 The engine setup for supercharger looks alot like the P-63 setup on the Allison V-1710-93 with the mechanical second stage supercharger attached by a post to the main engine. That was part of the reason the P-63 was much longer than the P-39.

I have been really impressed your books on Naval fighters/strike aircraft and the F-111B and F8U-3 monographs.

Thanks for the compliment. It does look like the P-63 arrangement, which was a mechanical supercharger, and on reflection, I'm not sure that the artists concept is a turbo supercharger. I should also have mentioned that the one-off XP-39 turbo supercharger was located below the engine, not aft of the engine, with the requisite intercoolers mounted on the side of the fuselage.