Kim Simmelink left a comment on my original Texaco post (http://thanlont.blogspot.com/2013/10/texaco.html) asking about a McDonnell refueling pod. As it turns out, that was a Beech pod but more about that later.

The original post didn't delve much into the Navy's development of inflight refueling of jets. One of the first inflight evaluations involved the North American AJ Savage, with an XAJ-1 being modified to replace the jet engine in the aft fuselage with a refueling reel, hose, and drogue.

North American apparently proposed an AJ-2 in this configuration but it would appear that the extra speed provided by the jet engine was considered to be of more benefit than reducing the available volume in the bomb bay.

Note that the drogue was still a rigid, all-metal cone.

This was soon replaced by the collapsible and presumably lighter shuttlecock-type drogue that was probably more stable in trail than the all-metal cone. 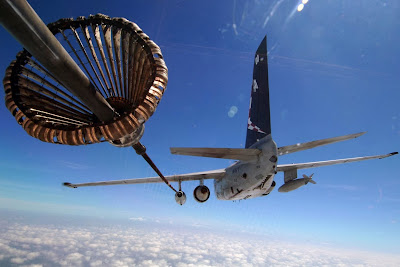 As reported in the original Texaco post, Douglas developed the grandfather of what is now the standard externally mounted refueling store but there were alternatives. McDonnell evaluated a pod for the F3H that the Navy didn't buy. (I had assumed that it was developed by McAir but a caption in the 18 January 1957 issue of Flight identifies it as a Beechcraft Model 102-G refueling store.) 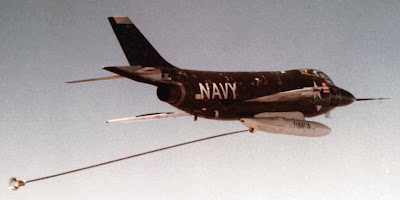 Vought also proposed one for the F7U/A2U program but it probably failed to even reach the hardware stage as a result of the Navy's loss of enthusiasm for the Cutlass. Only North American's design was deployed on the tanker buddy of its FJ-4B alternative to the A4D Skyhawk for nuclear weapon delivery. (Either the North American version was fielded as a backup up to the Douglas D-704 store, consistent with the Navy's belt and suspenders approach to aircraft development at the time, or the low-wing configuration of the FJ-4 precluded the use of the Douglas store.)

Note that the right external store contained the drogue. The matching left-hand store was also equipped with an air-driven pump to transfer its fuel to the right-hand store.

Attempts were made to increase the vertical separation between the tanker and the receiver with booms. The A3D was evaluated with one. It proved unsatisfactory.

External stores with this feature were also developed. This one being considered by the Air Force, here hung on an F-84F, was evaluated by NATC in 1958, only a year or so after the Douglas buddy pod was introduced in the fleet. 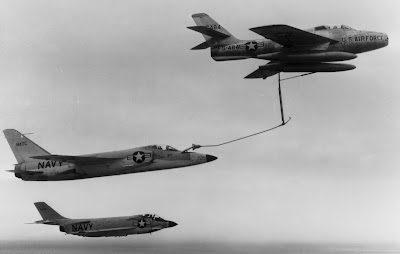 Beech also developed a similar pod beginning circa 1960, leasing a civil-register Douglas A-26 as the tanker. It was evaluated by the Navy in 1961, here with an A3J*.

NATC also hung the Beech pod under an F4H, presumably to evaluate it at higher speeds than achievable by the A-26, with the following picture prompting Kim's question. 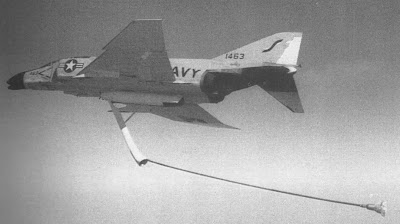 None of these boom-type solutions proved to be superior overall to the simpler original concept of simply trailing the drogue out the back of a pylon-mounted pod that is still the standard today, almost 60 years after its introduction.

However, the Air Force did introduce a similar arrangement in order to provide drogue-refueling capability from its boom-equipped tankers. As originally implemented on the KC-135, it was referred to, not fondly, as the Iron Maiden. For an illustration and excellent firsthand description of refueling from it, I highly recommend that you read this: http://www.neptunuslex.com/2005/08/13/rhythms-part-xviii/

*The A3J-1 itself served briefly as a tanker, notably on its deployment on Independence.

The refueling store was located in the tunnel which existed to house the nuclear store and jettisonable fuel tanks.
Posted by Tailspin at 1:30 PM

Hello, I work at an advertising agency and my client would like to use one of your images in this post in a presentation. S-3 Viking shot. Do you own the picture? If not, where did you get it from.

You're in luck. It's public domain and although the resolution isn't great, it should be enough for a presentation. Go here:
http://www.navy.mil/management/photodb/photos/060510-N-9621S-032.jpg

This is another view: